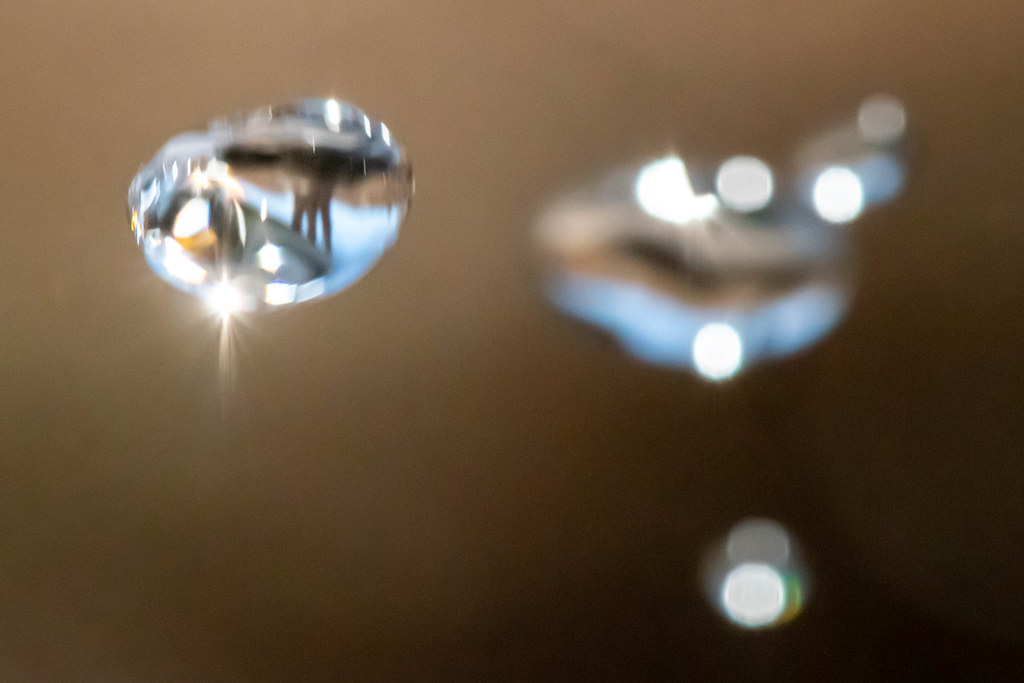 I didn’t want to post this photo. I don’t even like it very much. It’s not super sharp, it’s not super compelling, and I know I can do much better. And yet, I’m sharing it not because the image in and of itself is anything, but because it represents something. When I look at this shot I don’t see a water droplet frozen in time; I see a much better image that I’m going to take someday. In that regard I suppose you could call this shot a weird form of accountability: by posting it publicly here on Weekly Fifty, it’s almost like a personal challenge to me to create something better and I hope I can do it :)

On the north side of campus there is a water feature that involves a small curtain of drops falling onto a bed of rocks. It’s in a garden of sorts, and it’s kind of calming to look at. I thought it would be fun to try to take a picture of the water frozen in time, hovering inches above the ground with all else obscured in a beautiful blur. The reality of what I captured doesn’t reach those lofty heights, but again, this picture hints at greater things that I want to get someday soon. Below you can see the setup I used to take this shot.

I used my Nikon D500, 105mm f/2.8 Macro lens, and a tripod to get right up close and personal with the curtain of water. My idea was to get the plane of focus just right and then fire off a ton of shots in rapid succession, all at 1/8000 second in order to freeze the motion of the drops. I took nearly 400 images and while some were in focus, not a single one of them froze time in the way I had hoped. 1/8000 second is really fast, but when shooting very tiny objects at 105mm mere inches from the lens, even the smallest bit of movement is magnified to an extraordinary degree. I don’t know if, given the rules of light and physics, I will be able to get the shot I’m aiming for, but I’m going to try different setups and see what happens. (To wit: The above image was shot at 1/500 second with my iPhone and the drops are clearly frozen in time. But that was much father away and you can’t see the micro-level movements of the individual drops in the way that you can on a macro lens.)

So even though this is the one that got away, it’s still a picture worth sharing and one that I hope to return to over time as a bit of inspiration. Or perhaps more of a challenge. Either way, I’m determined to get the shot :)