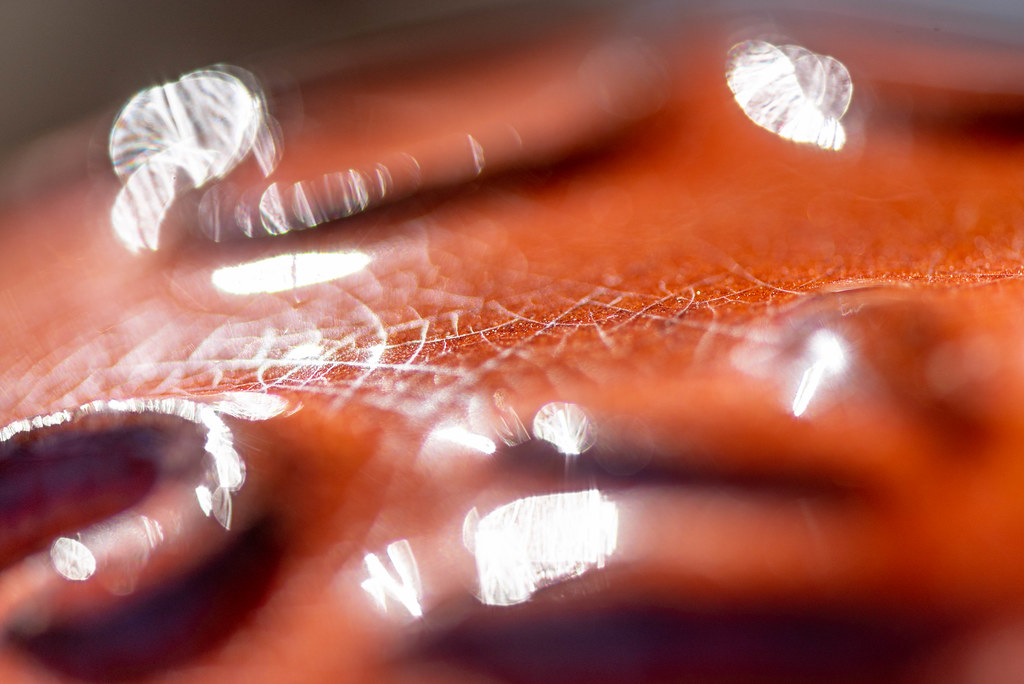 This is more of an experiment than a photo, but given that the result turned out fairly well I’m happy to use it as this week’s image here on Weekly Fifty. Near the edge of Theta Pond on the OSU campus are a couple of odd, orange spheres about a foot in diameter sitting atop a low stone wall. They must be some kind of decoration because I don’t know what functional purpose they serve, but as purely aesthetic objects they have always seemed a bit out of place to me. Not that I’m a good judge of art or architecture; I just don’t know if I get these things on an existential level. I suppose I don’t have to though. Such accoutrements are often subjective in their interpretation, and it just so happens that I think I found an interesting way of photographing them.

As I was walking past one of these orange globes one afternoon I noticed the light reflecting off its surface in kind of an interesting way. The reflection was far from uniform, with spots of white light standing out against the deep orange, and a cracked texture just beneath the shiny surface. I had my Nikon D750 and 105mm macro lens with me so I got close, real close, to see if I could capture the essence of what I was seeing in the form of a photograph. I wanted to get the details of the leaflike webbing, but I also wanted to show some of the light spots in the foreground and background. I opened up the aperture on my lens as wide as it would go, stooped over, and took a few shots.

When I looked at the results on the rear screen of my camera, they didn’t quite look like how I had hoped. I realized the problem had nothing to do with my camera or exposure settings, but the way at which I was viewing the scene. I played around with a couple different ideas: standing up and looking down, shooting from different angles around the sphere, and so on. I also used manual focus and paid careful attention to the focal plane in the viewfinder, and eventually got the image you see here. It looks pretty cool and I’m not sure you would even know what this is at first glance, but it’s another example of how looking at familiar scenes with a macro lens really can have a transformative impact on your photography.