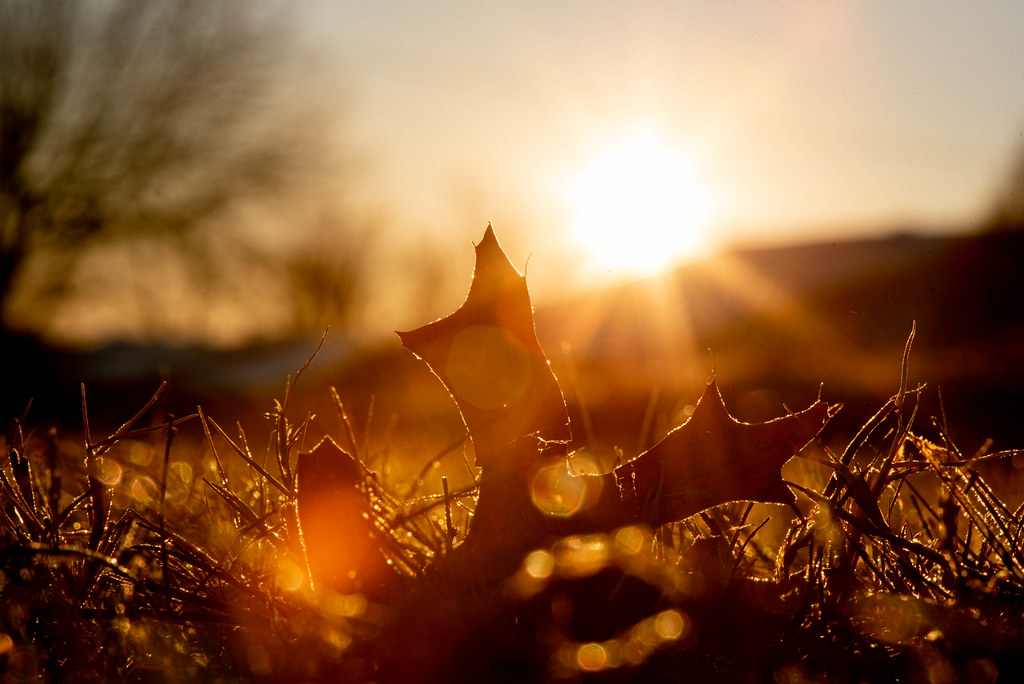 This is one of those photos that started as something very different than how it turned out, and is significantly better as a result. I was pulling out of my driveway on a very cold morning in February, and noticed that the ground was covered with a light layer of frost. That doesn’t happen too often here in Oklahoma, and I think it came about because of a bit of rain followed by sub-freezing temps overnight, but this being a photo blog and not a weather blog, I suppose the cause isn’t nearly as important as the result. And the result, if I do say so myself, is pretty cool. I saw this leaf sticking up and thought it would make for a neat picture, but what I had in mind in that moment was pretty different from how it actually turned out.

Originally I was just going to take a shot of the leaf by itself with my macro lens, and hopefully get an interesting view of its frost-tinged edges and veins. I immediately thought of this shot that I took in 2015 and wondered if I could replicate it, so to speak, but with a macro lens. Or at least take another image that was inspired by the earlier one, as I have had the habit of doing recently here on Weekly Fifty. I put my car in park, got out, grabbed my D750, got down low, put the camera in Live View…and that’s when I noticed it. Not the leaf and the frost, but the sun behind it. Good gravy.

The unexpected image of the sun coming up over the horizon immediately transformed what I was thinking about as I took this shot. Instead of being about a frosty leaf, the photograph became an entirely different image of a sunrise in the background, a leaf in the foreground, and a monochromatic yellow-and-black color scheme that is kind of different and unique for me in my photography. I took a couple pictures with a somewhat wide aperture because, well, bokeh, but then I realized I could do something even greater and make an image that was a lot more interesting if I stopped down my lens a bit.

I ended up going with f/38 which still had an impressively shallow depth of field, but also served to turn the sun into a brilliant multi-pointed star with rays emanating out in all directions as it crested my neighbor’s house. A minute later and this shot was gone, having turned from dawn to day, and I was back in my car on the way to work. But for just a moment this everyday pedestrian scene in my front yard mere inches from my driveway was transformed into something much greater, and I consider myself fortunate that I was able to capture it in my camera.