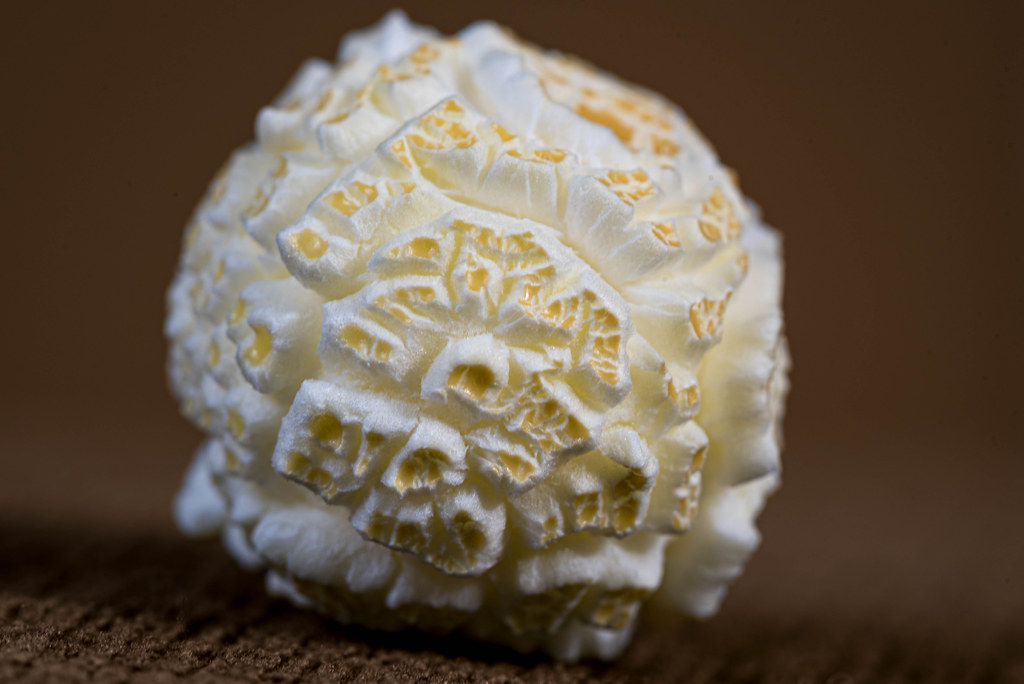 This is one of my favorite kinds of pictures to take–the kind that comes out of nowhere, grabs you by surprise, and turns into something unique, fun, and unexpected. This is exactly what you probably think: a single piece of popcorn. Nothing special, and yet, it is kind of special. My wife and I are huge fans of Star Trek and popcorn*, and it’s not uncommon for me to whip up a batch of the latter while watching the former on any given evening after the kids are in bed and our normal obligations are wrapped up for the day. (Or just postponed until tomorrow, which does tend to happen maybe a bit more often than I care to admit.) I don’t usually see popped kernels with this level of roundness and uniformity, so instead of eating this one I decided to save it until after the show was over to I could get a close-up photo.

The setting here was pretty basic: I put my camera on the coffee table, stacked some pillows on the ground, set the kernel on the pillows, and used Live View to compose the shot and get my focus just right. I tried a few different apertures but settled on f/22 which, combined with ISO 100, meant I needed a whopping 15-second exposure. Motion was not an issue and lighting was kind of dark but the final shot turned out really well and I hardly had to do any cropping at all to get it to what you see here.

I think what I really like about this picture is the sense of scale and familiarity, but also seeing the familiar in a different light. Most people recognize a piece of popcorn and can easily tell that’s what this is, but most people (at least in my estimation) haven’t really looked at a single piece of popped corn up close and personal like this. The intricate textures, the network of valleys, the subtle colorations and gradients as they shift from light to dark…it all adds up to a fun way of looking at something completely ordinary from an entirely different perspective. I must admit when I got my macro lens I never thought I would be using it to take shots of a single kernel of popcorn, but here we are. And I’m glad for it :)

*Popcorn recipe that I have used for years:

1/3 cup refined coconut oil. (If oil is solid, add it to the kernels and then microwave for 30 seconds to melt the oil.)

Pre-heat 10-quart pot on medium high for 10 minutes. Leave the cover on while heating.

Add kernels and oil to pan. Cover, and shake vigorously every 20 seconds or so.

When finished popping, pour into a big bowl and add a dash of salt.