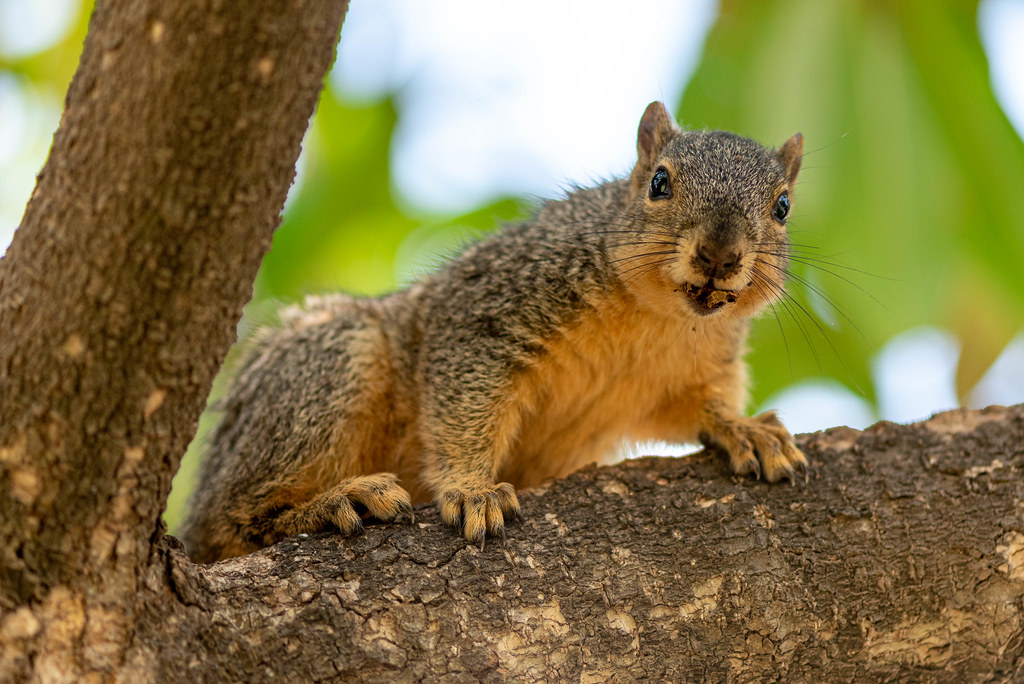 This picture shares a couple similarities with the Goose photo I posted in mid-May, in that it doesn’t seem like an especially complicated picture to take but it required a bit more than what you might think. As you might have guessed, the setting for this was none other than Theta Pond where about 90% of my images are taken, and on this particular day I had my camera with me but nothing specific in mind for a photo. It was just me and my usual combination of D750 and 105mm f/2.8 lens out for a stroll, and for the most part I really didn’t see anything that caught my eye as photo-worthy. No big deal though: the weather was great and it was a good day to be out for a stroll, and sometimes that’s all you want or need.

As luck would have it (which is not uncommon for a lot of my Theta Pond photos) I came across this squirrel chewing an acorn as he made his (her? I have no idea.) way up the trunk. Even though there are students and pedestrians perpetually patrolling the perimeter of the pond, the animals are still fairly skittish and don’t like it if you come too close. But this squirrel, kind of like the goose from last month, must have figured I was not much of a threat. After reaching a branch about six feet off the ground he paused and just kind of looked at me for a few seconds. I grabbed my camera, quickly checked that I was shooting as wide as possible, and fired off a couple shots. Maybe a dozen in total; I can’t exactly remember and I don’t really want to load up Lightroom to check. Initially I was just thrilled at the idea of getting any shots of this squirrel, but after half a moment I came to my senses and focused right on his eye hoping that even one of the shots would turn out.

And one did! Not only is the squirrel’s eye in focus, but the rest of the image works pretty well from a compositional standpoint. The tree branch going upwards diagonally through the frame is distinct and separate from the animal’s fur, which I chalk up to more of a happy accident than careful planning. I like that the squirrel looks as though he is on the edge of skittering away, which lends a sense of tension and pent-up energy to the photo. And the diagonal stance draws your eye naturally to his, while the depth of field is just shallow enough to get the important parts of his face in focus while the rest of him gently fades away. For a picture that had no planning whatsoever, this turned out really well and is a good reminder to me that macro lenses are good for more than just macro photography.