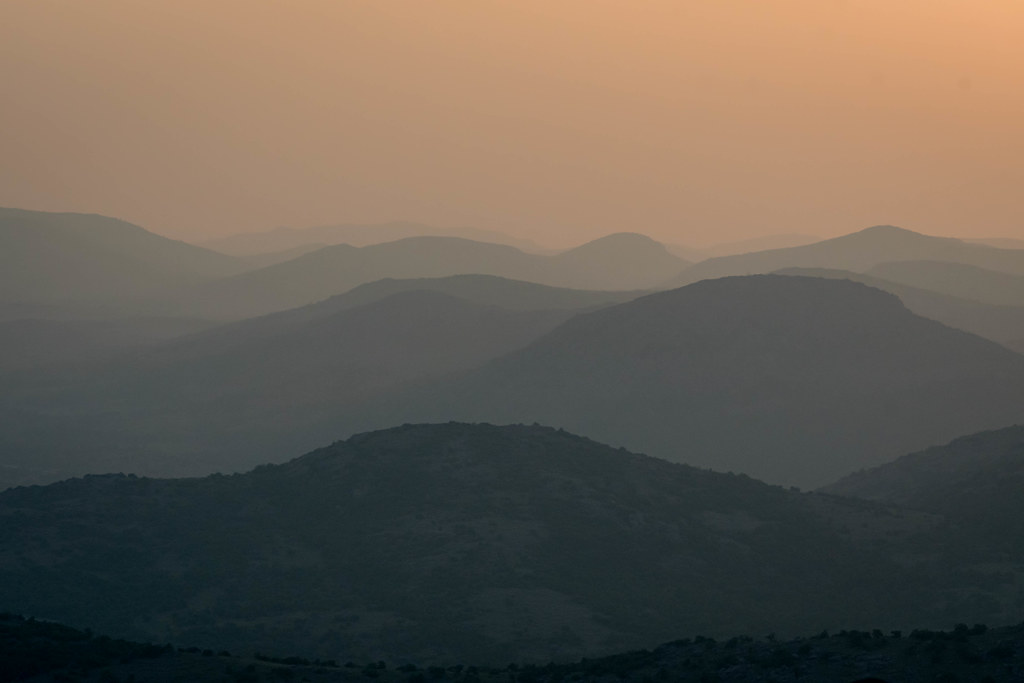 If you have been following Weekly Fifty for any length of time you know that I’ve never posted an image like this. At all. Nearly every picture I take is fairly simple and, to be perfectly honest, kind of similar. There’s usually a clearly-understood subject, some foreground and background elements, and often some additional things that add a bit of context. I don’t like to go for abstract art and I’m not one for over-complicating the image-making process. Normally, and especially since I got my macro lens, I just take simple pictures of things I see in my daily life.

I took this picture at the top of Mount Scott right as the sun was setting on the evening of our final day in the Wichita Mountains. I actually have a few shots that include the sun, but decided to specifically compose this image (as well as crop it in Lightroom) so as to exclude our closest star. It felt more interesting to just show the mountains without the sun, and in fact the sun ended up distracting the viewer from the rest of the scene with the mountains and hills slowly receding into the distance. It was incredibly windy throughout the day, which lent an ethereal, almost otherworldly, quality to the atmosphere thanks to all the dust and other particles that were mixed in with the air.

I’m not going to say that this is one of the best pictures I have ever taken (far from it!) but it ranks among the most unique and singular images in my entire collection. I don’t think I have ever been able to capture a picture of a hazy sunset from the top of a mountain, and even if we make it back to Mount Scott I don’t think I’ll be able to get a shot like this unless the weather is just right. One thing that took a bit of experimenting with this composition was the exposure settings, and in the end I think it came out fairly well. I shot this at 116mm, f/8, 1/1000 second, with an ISO of 720. I prefer not to use high ISO values on my D500 and while I could have used a slower shutter speed to get something like ISO 200 or 400…I just plain forgot about it. I had my Auto-ISO set to a minimum speed of 1/1000 second thanks to some pictures I was taking earlier in the day, and I didn’t even realize it until we were back at the Airbnb later that evening and I was looking through my shots on the rear screen of my camera. As it turned out, I was able to get a more-than-usable image with ISO 720 and plenty of room to edit the shadows and a bit of highlights too, and end up with the shot you see here. I’m quite proud of it, and if I may say so I do think it would make for a good phone or desktop background. Feel free to click on the picture and download the original from Flickr, and make sure to let me know if you do use it on your device :)