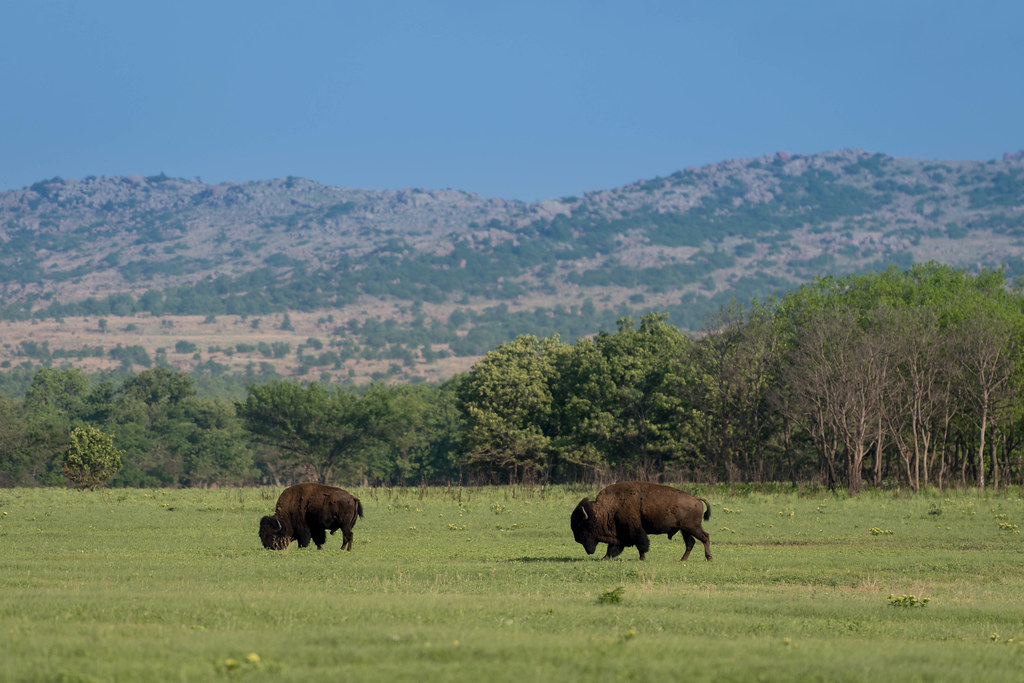 This shot strikes me as something unique to the American west, even though I suppose it’s possible to get similar pictures elsewhere in the world too. The grassy plains in the foreground, the mountains in the background, and of course the gigantic bison at roughly the bottom third of the picture all combine to create a scene that makes the viewer think of an Old West aesthetic: Native Americans, cowboys, frontiers, and untamed wilderness beckoning one to adventure. That might seem a bit grandiose, and perhaps it is especially considering that I took this shot not from horseback but from the side of an air-conditioned Subaru, but it makes me think about things much bigger, and much older, than this present time and that’s something I find to be incredibly powerful.

I took this picture one morning on our trip to the Wichita Mountains Wildlife Refuge when my wife and I loaded up the kids and decided to get started with our hiking early so as to avoid the hundred-degree temps that were predicted within a few hours. We drove through the refuge for several miles on our way to Elk Mountain Trail, but found our drive unexpectedly interrupted by a herd of bison: some on the road, some grazing on grass, one one that was using a 20MPH speed limit sign as a scratching post. My wife pulled the car to a stop on the side of the road and all four of us just kind of sat there in the relative safety of the Subaru while watching these massive beasts go about their business, and making sure to keep our distance, ready to hightail it out of there at the first sign of trouble. After a minute I stepped out with my D500 and 70-200mm f/2.8 lens to see if I could get a few shots of these animals, and eventually got the picture you see above.

What really sells the image, at least in my opinion, is the sense that it is a complete composition. It’s not just two bison on the prairie. It’s the entire scene, in which the bison are but component parts. All the elements (sky, mountains, trees, grass, and bison) work together to create a complete whole and the animals, necks bent and tails wagging, are just as essential as any of the other parts. It’s a visual representation of 1 Corinthians 12, and a reminder to me of why it’s important to have something greater in mind than just the subject you are photographing when you take out your camera and start to click away.