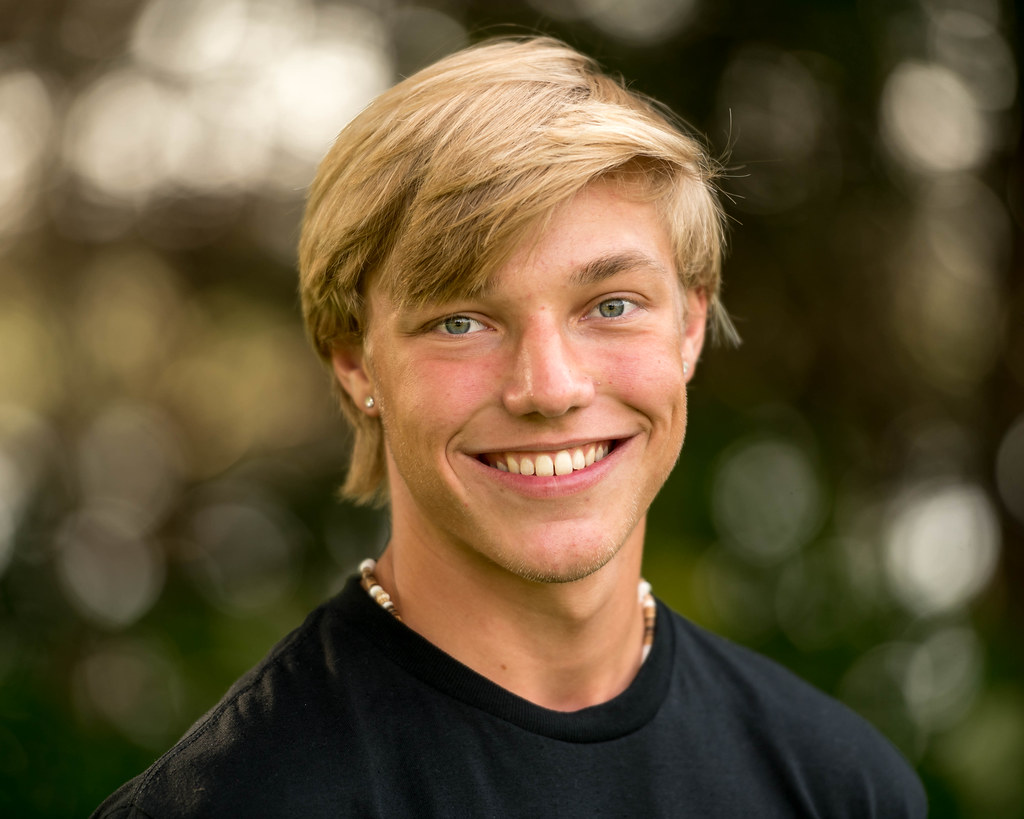 This is the kind of picture you almost never see here on Weekly Fifty because, as you probably know by now, I like to keep things mostly people-free and stick to nature and objects and other things of that nature. When I do post pictures of people, especially my kids, I don’t use faces. This one is an exception though, not because of the person specifically but because of all the elements that went into taking this shot. I have a side project taking portraits (not really a business, since I only do a couple photo sessions a year) that allows me to flex my creative muscles in a bit of a different way compared to photos of flowers and animals and this is an example of the type of portraits I really enjoy doing.

A few weeks before our annual extended family trip to Kansas my sister-in-law asked me if I would take photos for her son who is about to enter his senior year of high school. I gladly obliged and immediately turned down any offer of payment since I like to do this kind of things for free when family is involved, and set about getting my gear ready and thinking about the kinds of shots I would want to take. The day before I took this picture I was out walking around the resort with my brother, my wife, and some of the nieces and nephews when I saw a wall of trees with sunlight poking through the branches and thought it would make for a nice portrait location. I had my D750 and 50mm lens with me, and asked my niece if she would basically serve as a stand-in while I evaluated the lighting and took some test shots. The next day when we were doing the photo shoot my nephew and I went to the same spot, albeit with some upgraded camera gear, and took a bunch of shots similar to what you see here.

I took this with my favorite portrait setup, the amazing Nikon 70-200 f/2.8G ED VRII, and my D750 with the battery grip (which helps balance out the weight of the lens. Oof, that thing is a heavy beast.) I zoomed in all the way to 200mm and shot wide open at f/2.8 because I wanted to get the spots of light as bokeh-tastic as possible, and it worked like a charm. The slightly overcast sky also gave us plenty of dispersed light such that even though he was backlit his face is still evenly lit with enough contrast to give him plenty of depth and dimension. The light on his right shoulder (on the left side of the composition) adds another layer of depth to the image and is a good example of why backlighting can be so effective. Finally, I made sure to position him and myself in such a way that the background blobs would be dispersed around his head and not directly behind his head—though there is a bit of an exception on the top-left side of the frame.

Shooting portraits with that lens, especially at 200mm and f/2.8, can be tricky due to the extraordinarily shallow depth of field but if you have a subject who is able to take direction (unlike, say, a young child) the results can be amazing. I know other photographers prefer to shoot at 85mm or 135mm, and those are great too, but I continually come back to the versatility, utility, and just plain sharpness of that 70-200 f/2.8 lens. It’s amazing :)