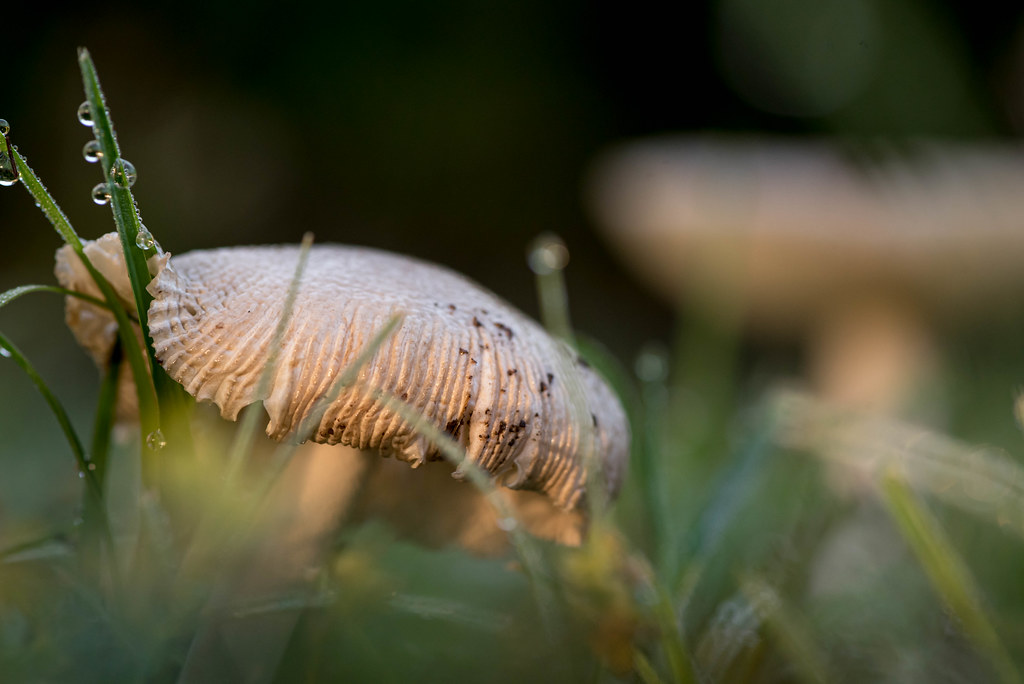 I was looking through my gallery of macro shots recently and discovered something a little surprising: I had no close-ups of mushrooms! The last time I got low on the ground to take a macro picture of fungi it was this shot from May 2021, and that was with my 50mm lens and close-up filters. (And also my first real experimentation with focus stacking, something I have not done since. Mostly because it’s more work than I’m used to doing, not because it’s particularly difficult to get the hang of the basics.) So when the sun was rising on a warm June morning, after a couple of rainy days to really get the ground nice and soaked, I ran outside and took this photo of a mushroom that had recently popped up in my back yard. Only this time I did it with my 105mm macro lens, which made a pretty big difference :)

I want to stop short of comparing the two images, since a discussion about which one is better kind of misses the point. Both are similar and unique in certain ways, and I used the former to inform my compositional and exposure choices about the latter. In short, they’re both good images and I see some things to like and appreciate in either one. As for this specific picture though, there are some things that I quite like. I used an f/11 aperture to get the front mushroom tack sharp which still left a depth of field shallow enough so as to make the blades of grass just a bit out of focus. (Something I continue to learn about shooting close-up images is that even smaller apertures can still give you razor thin depth of field. It’s still weird to wrap my head around that.) I intentionally composed the shot with one mushroom in front and another in the back to give a sense of space to the composition: foreground elements, subject, and background elements all working to form a complete picture. The only real issue I had when taking this picture was related to ISO: I didn’t want to go super high and lose detail or editing headroom, but 1400 on my D750 works just fine and has hardly any of the problems that can be associated with high ISO shots.

Mushrooms don’t pop up too terribly often in my daily life so when they do it’s fun to go out and take pictures of them, especially in the early morning while the dew is still fresh and the sunlight is just barely poking over the horizon. I hope I get more opportunities to take pictures like this soon :)