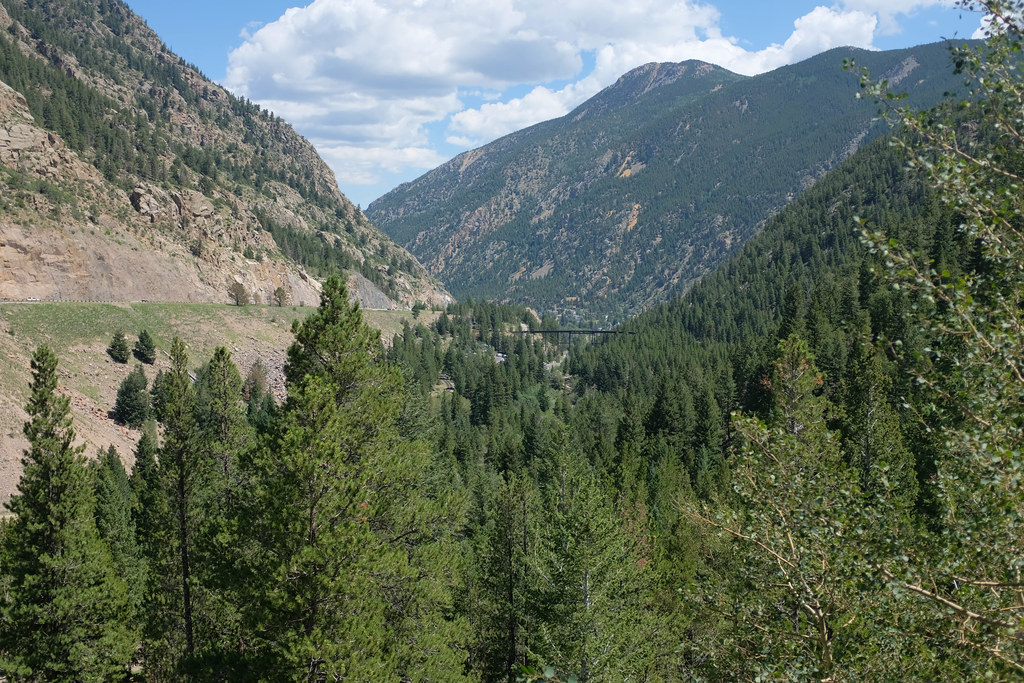 One of the most difficult, but most essential, components of landscape photography is establishing a sense of scale. When you see a grand scene or sweeping vista in person you can tell how vast it is by comparing it to other things in your immediate surroundings: trees, buildings, animals, people, roads receding into the distance, even the clouds in the sky can help establish a sense of scale. But how do you convey that to an audience who might be viewing your picture of the landscape on a tiny little phone screen? It’s not easy, but it’s essential for your photos to be impactful and meaningful. I’m not sure if this picture accurately conveys a sense of scale or not, but I certainly tried to and I hope it comes across even in some small way.

What you’re looking at here is a view of some huge mountains near Denver. I shot this when my family and I, along with my cousin and her husband, went on the Georgetown Loop Railroad on a warm Saturday afternoon in late July. It’s kind of a tourist-ey activity, but the older I get the more I have learned to embrace those kinds of things from time to time. Did we really need to spend money on train tickets to go a few miles up a mountainside and then right back down to the start 45 minutes later? Probably not, but it was fun and everyone enjoyed the time spent together, so why not? I had my Fuji X100F and my iPhone mostly just to take pictures of our kids on the train, but I wanted to keep my eyes open in case other photo opportunities presented themselves. While pictures of mountains aren’t super difficult to come by, the bridge in the distance helps establish a sense of scale that’s not easy to get across and it’s the reason I took this shot in the first place.

As we rounded a curve on the mountain and I saw this bridge appearing in the distance–the same bridge we crossed a few minutes earlier–and I had maybe 20 seconds to think about the shot, adjust my camera, and hope I could get the image I was aiming for. I The train cars in which we were riding had no windows so there were no issues of glare, dirt, or color tint so at least those didn’t need to be considered but I did have to think about the basics. Always the basics. No matter what you do in photography, you always have to keep coming back to the basics: aperture, shutter, and ISO. I wanted to freeze the motion of the entire scene with no motion blur in the foreground, and I wanted to use a low ISO to get a nice clean shot. I dialed in an aperture of f/2.8 just to make absolutely sure there would be no motion blur, focused on the bridge, and took the shot.

It worked :) What you see here is exactly what I shot—no cropping or editing. It almost looks like the bridge is Photoshopped, but it’s not. Everything you see is exactly as it was, and a few seconds later the scene disappeared entirely as we went around the bend and continued our journey in the train. I don’t know when I’ll be able to get a shot like this again, and but I sure hope I can sometime. The mountains are absolutely beautiful.