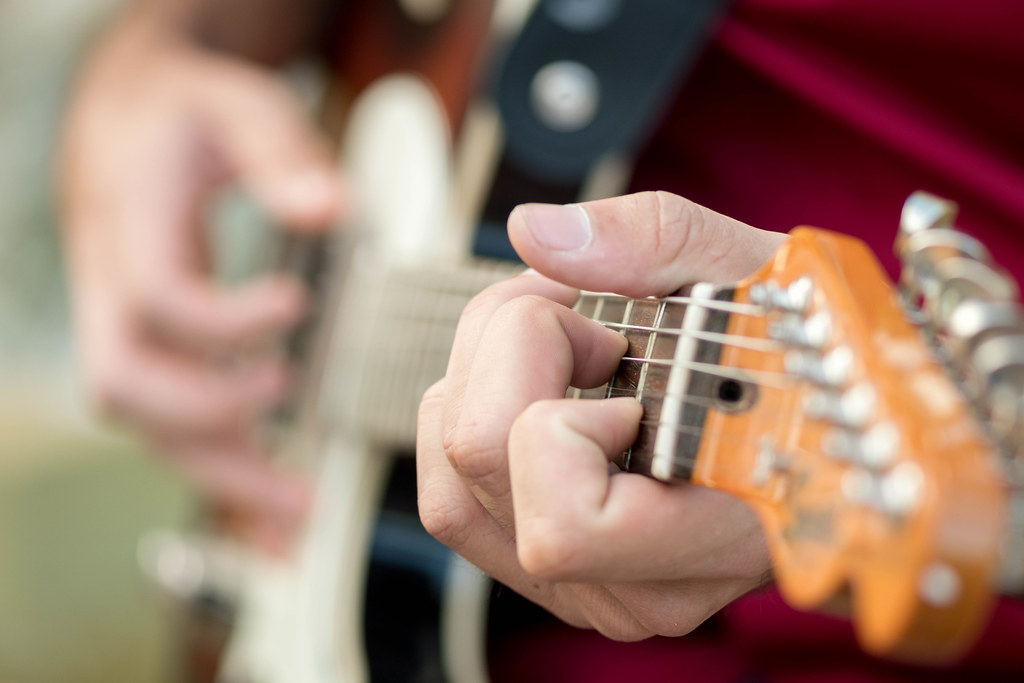 I don’t remember exactly how old I was when I started playing guitar, but it was at some point during my high school years. My buddy Nick and I basically taught ourselves to play in each other’s basements and garages, and since most of the time we didn’t really know what we were doing when we plugged our cheap electrics into our amps and strummed away, Nick just called it “noodling.” I still use that term to refer to the act of just kind of playing the guitar aimlessly, picking strings or inventing chords or working through a scale or trying some new riffs that just sound good, even if you don’t know the musical theory behind it all.

That’s basically what’s going on here, though a bit more context is required to really make sense of this picture. As you may or may not know, my wife and I have a side project called Stevens Creek Photography which involves taking simple portraits of people around town. We don’t do weddings, and we don’t do birthday parties, and we don’t do any sort of big event photography at all. What do, though, is take great pictures of individuals and families. I don’t usually share these photos here on Weekly Fifty since it seems rather self-indulgent and not exactly in the best interests of my clients who pay me to take pictures for them, not for me to share on my personal blog.

Anyway, I recently did a high school senior portrait session for a young man who asked if he could bring his guitar along for the shoot. Of course I said yes, that would be just fine, and I ended up with this shot you see here which is, honestly, one of my favorite from the entire evening. Spoiler: this was the first time I used my macro lens on a portrait shoot, and I have a whole new level of respect for that lens and what it can do.

It started with a clear idea of the kind of picture I wanted to get: a close-up of this young man’s left hand on the neck, with his other hand strumming near the pickups. I asked him to sit on a bench and just kind of noodle away at his guitar, and then I got out my Nikon D500 and 105mm f/2.8 macro lens, and went to work. I set the aperture to f/4.8 since I wanted a nice balance between depth of field, low ISO, and fast shutter speed. That lens gave me the flexibility to shoot as close as I wanted to without even thinking about whether the pictures would be in focus, and I used continuous high-speed shooting to fire off dozens of shots hoping one would show his fingers in an interesting position while still, of course, being in focus.

In short, this picture was no accident. It was the result of months of practice with my macro lens, years of learning about exposure and manipulating the fundamentals of Aperture, ISO, and Shutter, and having a clear idea of the type of shot I wanted to get. There’s also lighting, composition, and the simple relationship-building that happens during a photo shoot. And it all worked out! I really like this shot and I hope my client does too :)