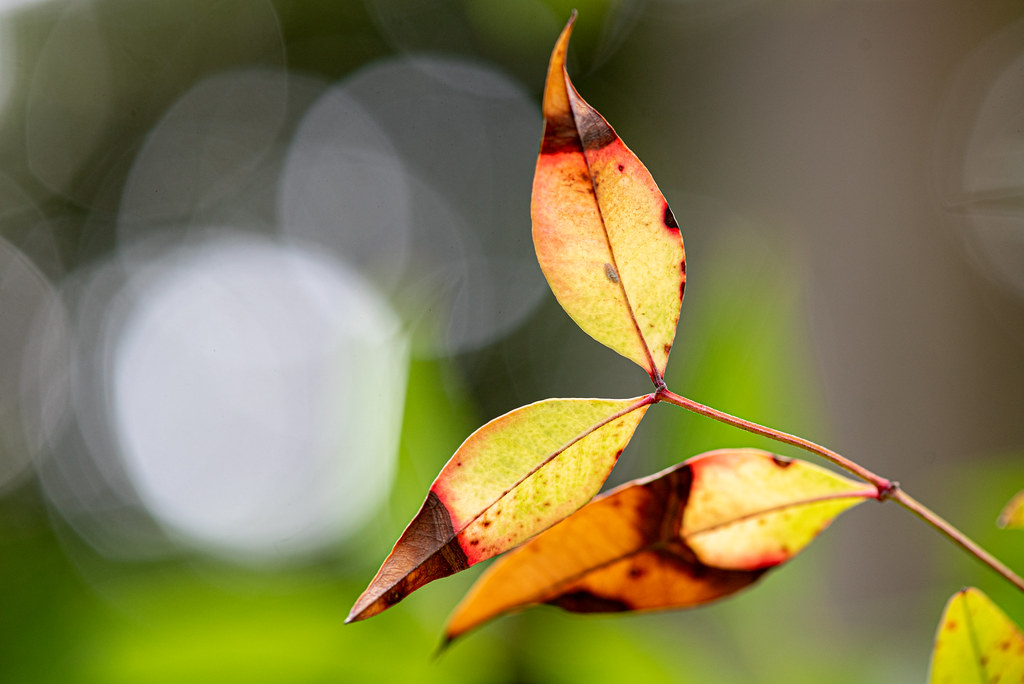 After a summer of traveling and exploring different types of photography ideas and styles from Oklahoma to Kansas to the Rocky Mountains, this week’s shot takes it all back to familiar territory. I took today’s photo while out for a walk around OSU’s Theta Pond, and it felt nice to return to something a little more simple and take the kind of shot that just feels comfortable and familiar: a simple composition with a subject in the foreground and a nice blurry background. The kind of shot that my macro lens excels at :)

The basic idea here was pretty simple: a close-up picture of some leaves in the midst of shedding their summer greens for autumn yellows. As I crouched down to take this shot I didn’t even think about the bright spot of light in the background, but when I reviewed the picture on the back of my camera I knew I wanted to integrate that into the shot somehow. (If I had a proper mirrorless camera I would have seen that bright white spot of light right away, but that’s a discussion for another day. Where’s my Nikon Z8?) But how?

I honestly wasn’t sure what I wanted the final shot to look like when I was out by the pond, so I took a dozen photos and then looked for the best one in Lightroom. Below you can see nine of the options, but before I tell you why I opted for the one I did I’m curious which one you would have picked.

I ended up going with Number 9 in the lower-right corner because it was, in my opinion, a complete composition where the subject in the foreground and the spot of light in the background complemented each other and worked together to create a complete image. Most of the other shots felt like two separate entities captured in the frame–the golden leaves and the white spot of light. They were competing for viewer’s attention rather than cooperating to form a single shot. Image 4 was a little different in that I shot it with a much wider aperture and positioned the light to be directly behind the leaves, but that ended up diminishing the impact of the light entirely and somewhat deflated the impact of the final shot. The more I looked at Image 9, the more I liked how everything flowed together and created a beautiful final shot.

While all of these shots have merit, it was fun to select what I thought was the real standout among the bunch and a good reminder to me that sometimes it’s the subtle details that matter most, and can make the difference between a good picture and a great one :)