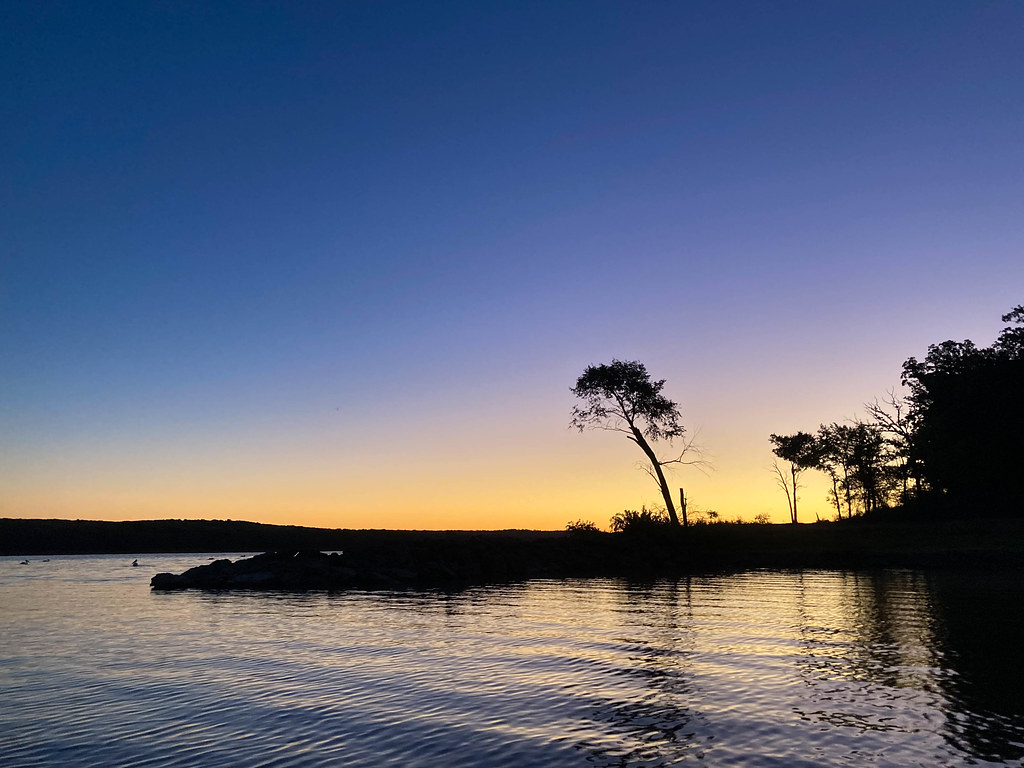 There’s a nugget of greatness in this picture, but it’s hampered by a few things and in the end when I look at this I think of it more as a learning experience than a picture I’m really happy with. (Or, to put it in correct grammatical parlance, a picture with which I’m really happy. But that just sounds weird to write and even weirder to say out loud.) And I know I sound like an old man yelling at a cloud, but this picture is also a good illustration, at least to me anyway, of why mobile phone cameras still aren’t as good as their DSLR and mirrorless counterparts. First, some backstory.

I shot this at Lake Fort Gibson, where some college friends and I spent a weekend in early October. We have kept in touch over the years and helped each other through a lot of life changes, and six months ago we started tossing around the idea of getting together somewhere just to hang out in person like back in the day. So we did :) We found a cabin, planned the grocery list, collaborated on logistics and travel arrangements, and finally met up to hang out and catch up on things. One of my friends and I took out the canoe on Saturday just to check out the lake, and we decided to get up early Sunday morning to watch the sunrise from the water. Which, of course, meant some good photo opportunities as well.

Here’s the big question I faced, though, which ended up being more consequential than I predicted: what camera should I take for the sunrise canoe ride? I brought my D750 + 105mm macro lens along with my Fuji X100F out to the cabin, and of course my humble little iPhone SE (2020) as well. I ended up just going with my iPhone out in the canoe for one simple reason: it’s water-resistant, and I knew that things were likely to get wet. So at 7am on a chilly Sunday morning, my buddy and I set out in the canoe to see the sunrise and all I had with me was my iPhone.

And in one sense, that was fine. But in another sense, I wish I had brought my Fuji.

As you can clearly see, this picture obviously does not have the sun in it. But you can tell, hopefully, that it showcases the sunrise at a lake. I took this while my friend and I were paddling out to the main portion of the lake, and I really liked this tree silhouetted against the rich, deep colors of the slowly-lightening sky in the background. I also took several shots once we made it out to the lake proper and watched the sun emerge on the horizon, but they weren’t as compelling as this one. Despite not actually showing the sun, this image with a clear subject set against a compelling background was much more interesting to me than the receding horizon with the sun shining bright as it crested the shoreline way in the distance.

So everything’s great, right? I mean, on one hand sure. It’s a fine picture. But it does not hold up under scrutiny, unfortunately. The sky has awful compression artifacts and the gradient looks like something out of a 1990’s-era CD-ROM game. The yellow is not nearly as rich and deep as it was in person, and the trees suffer from an awful lack of overall sharpness. In short, it looks like a mobile phone picture. Had I taken the Fuji and shot in RAW all those issues would have been essentially nonexistent, but then, what if I had dropped the Fuji in the bottom of the canoe or otherwise gotten it exposed to water? Pfft–no more Fuji.

In the end I think this was an acceptable compromise, but it does make me think about the shot that could have been. However, what’s more important to me than this picture is the story behind it: a weekend with the guys talking about life and sharing stories, capped off with a canoe ride at the break of dawn. And that, as longtime Weekly Fifty readers will recall, is all that really matters.