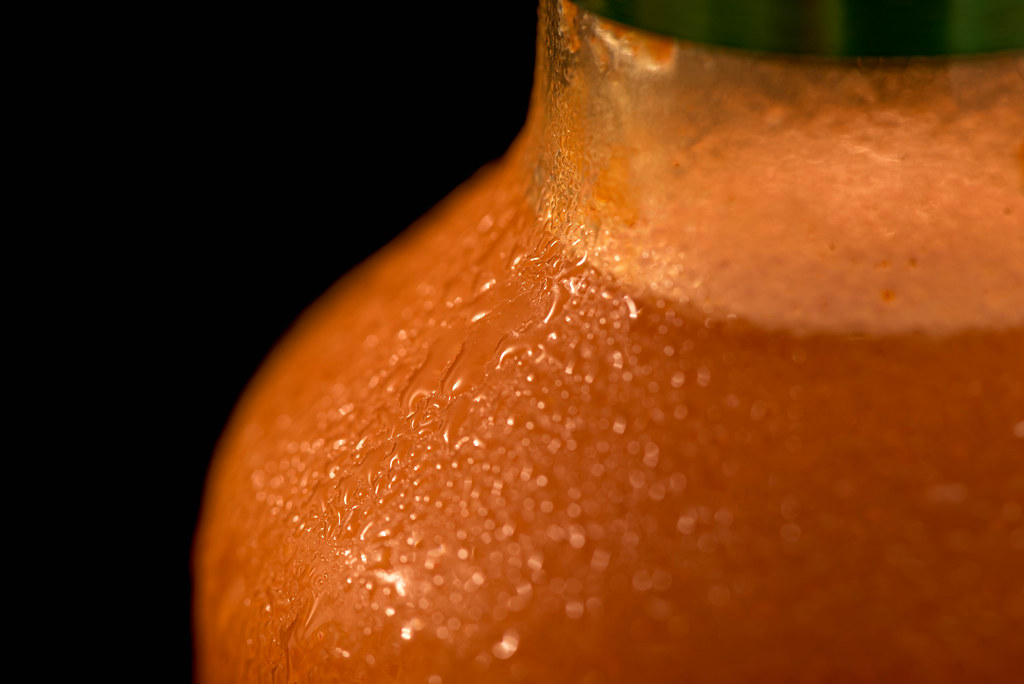 My brother Phil and I were talking about macro photography recently, and how nice it is to be able to envision a picture in your head and then know that you have both the experience and the gear to make that shot happen. It’s something I have really come to appreciate about lots of different types of photography, but especially close-up shots like this one. I used to see pictures in magazines or online publications and think that the people who took them had some kind of unreachable, unattainable mystic quality that allowed them to take such stunning images, but the more I learned and experimented with my own photography the more I realized that such things really were within my grasp. And the grasp of anyone, really. So when my kids and I were eating breakfast on a Friday morning, and I saw this jar of hot sauce sitting on the table with beads of condensation shimmering in the light, I immediately thought about taking a picture just like one I might see on some kind of product advertisement. And I knew I was pretty sure I could pull it off :)

I quickly ran to get my Nikon D750, 105mm macro lens, and tripod while also reminding my kids to eat their breakfast and try to finish before their mother was out of the shower. I scooted the bottle close to the camera, focused with the lens, and then set about tweaking all the little settings that make such a huge difference with close-up photography. The first thing I did was look for a way to eliminate the background, and for that I just put our iPad on a little vertical stand behind the bottle of hot sauce. Problem solved! Next I looked at the bottle and thought about what I wanted to photograph, and how to photograph it. I really liked the light reflecting off the condensation so I wanted that to be the main draw, but then also have enough of the bottle in the shot to provide a sense of overall context. Instead of moving my camera around I just scooted the bottle to different spots on the table until I found just the right location for this shot. (And again, as has become a recent custom…no cropping of the final image!)

Finally, the all-important aperture setting. F/4? F/8? F/22? I shot a few at wider apertures and then some at f/11, just in case I needed it but I thought f/8 would be the sweet spot. Turns out I was wrong–f/11 was the right one. When I loaded my shots into Lightroom I didn’t like the wider aperture shots at all, and in retrospect I think I could have gone even smaller than f/11. Razor-thin depth of field is not nearly as cool as I thought it would be before I got a macro lens, though of course I do appreciate the ability to have it if I need it.

The best part about all this was how I got to involve my kids in the whole thing. They helped me compose the shot, they looked at the rear LCD screen with me as we were figuring out exposure settings, and they got real excited when they saw the final shot too. The whole experience only took a matter of minutes (they had to get to school and I couldn’t spend all morning fiddling with my camera) but it was a unique little project and one that I’m glad we took the time to do.