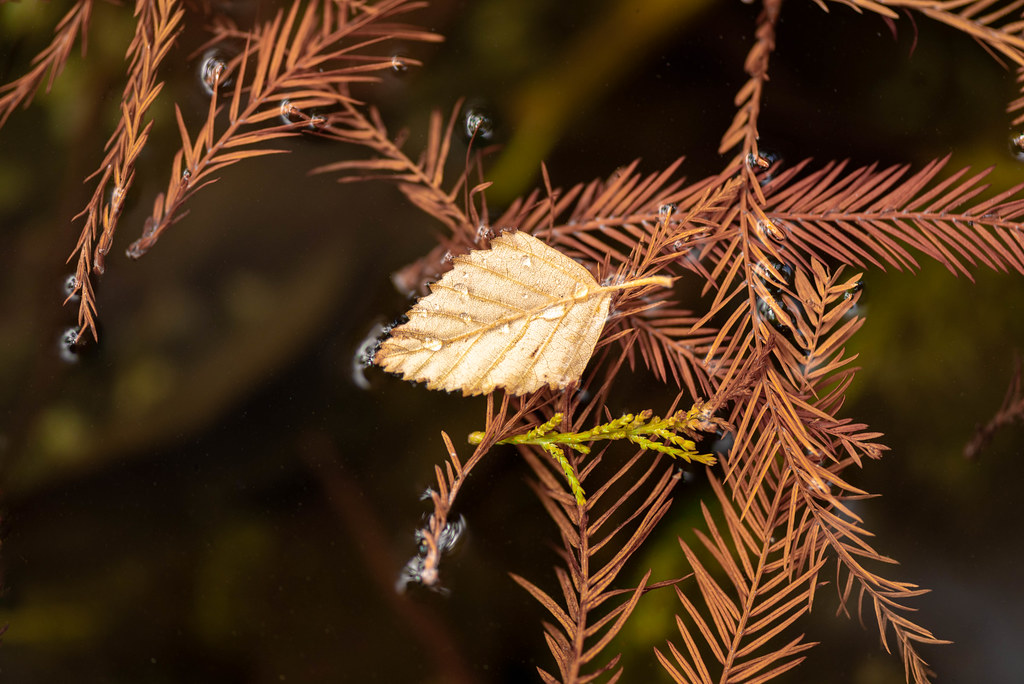 If you saw last week’s photo, this shot of a leaf on the water should be pretty familiar to you. And to be honest, I thought about not using it at all for this week’s picture because not only is it so similar to last week’s, but I shot it about five minutes after taking the other one too. Is it really fair to put up two photos that are so alike, taken in such close (physical and temporal) proximity? Well it is my blog, and I do get to decide…so why not? :) Also, though this post is coming a mere four days before Christmas, the theme of the photo is decidedly unrelated to the impending holiday. Read nothing into that! I schedule my Weekly Fifty posts several weeks in advance, and as I write this on November 11, there just isn’t too many Christmas-related photo opportunities around me.

Anyway, on to the photo. Though it bears more than a passing resemblance to its counterpart from last week, it also contains some notable differences. The first, and most noticeable, is obviously the presence of many other objects on the surface of the water. Namely, several brown cypress needles along with one bit of greenery that hasn’t quite given up the ghost. Or, at least, had not as of the time I took the photo. There’s clearly one main subject–the yellow leaf–but lots of other things on the same focal plane almost as if to complement the subject or at least add some context and visual flair to the photo. Subtle indentations in the surface tension are a bit more abundant in this image as well, and one thing you don’t see are the (probably more than one hundred) bits of dirt and dust that I removed from the image in Lightroom. There’s always more, but at some point it becomes a bit reductive, and at some point I just said “enough is enough” and uploaded the picture to Flickr in the state that you see it here.

Just like last week’s, this was a lot of fun to take. I bent out over the bank of Theta Pond with my D750 and macro lens held up to my eye, used my traditional technique of back-button-focusing to keep the leaf nice and sharp, and fired off a couple dozen shots as the scene shifted and changed below me right before my eyes. I like that this shot has basically two distinct layers: the surface of the water and everything underneath, which was only a few inches away but very blurry due to the ultra-shallow depth of field inherent when taking close-up shots like this.

Since taking this shot the weather has shifted and I think the throngs of winter might finally be here to stay, though doubtless we will still see plenty of pleasant days over the next several months. Even so, I think the photo opportunities around me will start to change dramatically, and as always at this time of year I’m excited to see what’s coming just around the corner.

Merry Christmas, everyone. God bless you all :)