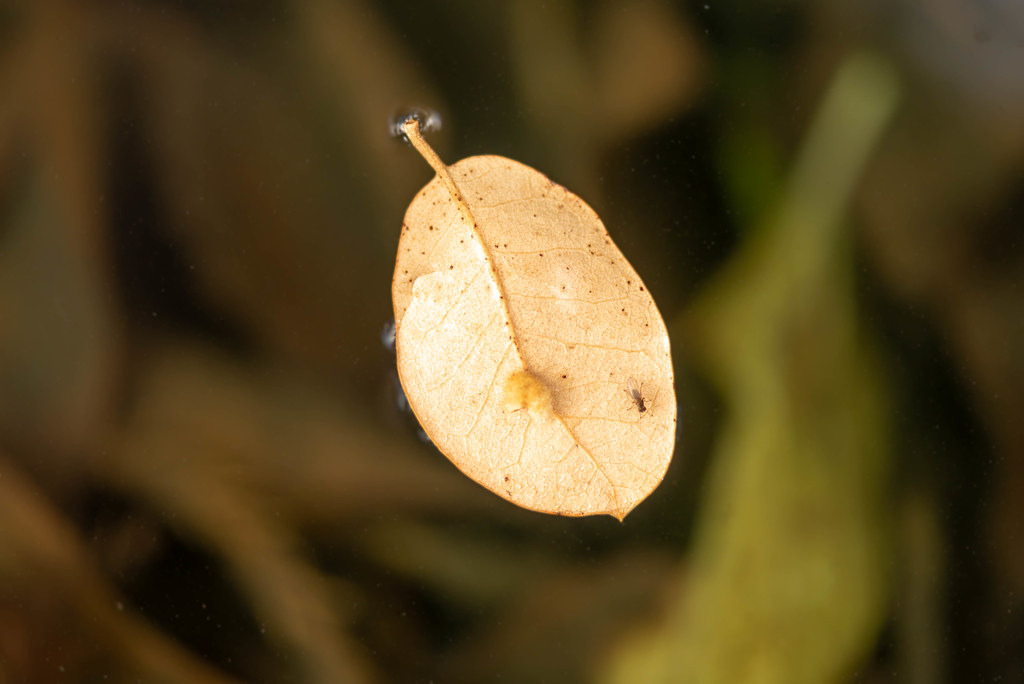 I have written a few times about how one of my favorite types of photos to take is also one of the simplest possible in terms of composition: a clear subject against a blurry background. These kinds of pictures are not going to rock the boat or win any awards for creativity, but they are supremely fun and rewarding to take and I feel like every time I shoot a picture like this I learn something from it. This one is a slightly different take on that same theme because the subject isn’t really in front of the background, but more on top of the background. Perhaps that’s just some silly semantic fiddling, but while it might not matter in terms of the final result it mattered a great deal for how I arrived at the final result.

I took this photo while out on a walk around Theta Pond at Oklahoma State University about two days before we were hit with a really bad cold front. It was a rather warm Tuesday afternoon and I had my Nikon D750 and 105mm macro lens with me, and when I saw this little leaf floating near the edge of the pond I thought it would make for a great photo opportunity. Turns out taking a photo of said leaf was a lot easier to conceptualize than it was to execute.

I needed a good vantage point from which to take this picture, and really the only option was to point my camera straight down at the leaf. Since Live View autofocus on the D750 is really slow (thanks to being contrast-detect instead of phase-detect) I instead had to kind of brace my feet awkwardly out to the side, lean out, put my camera up to my eye, look down through the viewfinder, and fire off as many shots as I could in rapid succession. The light on the water quickly complicated matters, as subtle ripples on the surface sent sunbeams scattering in all directions which dramatically interfered with the shot I was trying to take. Also, this leaf didn’t exactly stay put and I had to follow it as it floated along lazily by the bank. I used f/4.8 to get the leaf sharp while blurring the background, which was only a few inches below but when shooting a subject at such a close distance it doesn’t take much for things to get out of focus.

When I loaded this photo in Lightroom two things immediately surprised me that I did not notice while I was out by the pond. First, there were dozens and dozens of spots of dirt, dust, and other imperfections on the surface. I eliminated many of them with the Healing tool, but if you go to Flickr and look at the high-resolution original you’ll see hundreds of spots that still remain. (It was a matter of time, really: I didn’t want to spend all afternoon removing dust specks.)

The other cool little element about this picture that I didn’t notice in the moment is the tiny little fly using the leaf as its own personal watercraft. Just goes to show you never really know what you’re going to get when you go out to take pictures :)