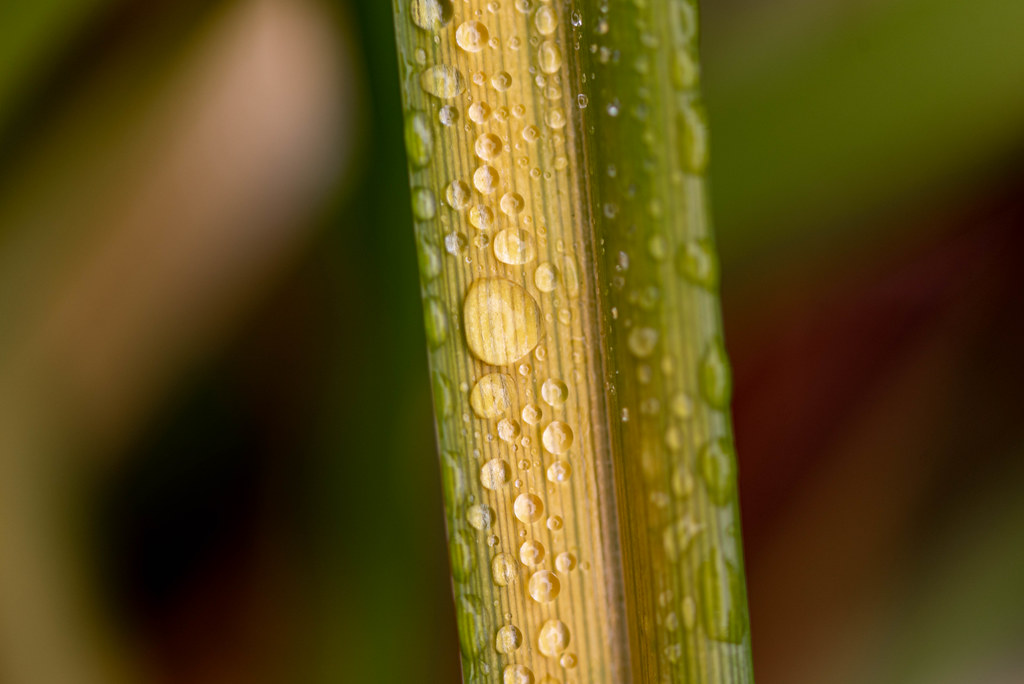 Rainy days, or perhaps more accurately, post-rainy days, are some of my favorite times to take photos. Even before I got my macro lens I enjoyed going out after a storm when the world is drenched and dripping wet to see what kind of shots I could get. The overcast lighting, the wet sheen on everything around me, the raindrops hanging from leaves, branches, fences, or pretty much anything you look at…it all adds up to some really great conditions for taking photos. Shortly after I took last week’s picture of some drops on a curved blade of grass, I saw this similar scene and wanted to try it out as well to see if it would make for a compelling image-creation opportunity.

On its own this blade of grass would probably not be all that interesting of a photo subject, but when paired with the drops of water and even, overcast lighting it took on a whole new appearance. Rather than take a head-on approach like I did with last week’s shot, I used. a technique I tried a few weeks ago where I basically tried to look straight down from on top of my subject. It worked OK for some shots of leaves in the water, and I figured I might as well try it here too. I used my Nikon D750 and 105mm macro lens, and tried to position myself so as to point my camera as straight-down as possible. I honestly didn’t know what aperture to use but I did want the subject sharp and the background, which was only a few inches away, to be nice and blurry so I tried several options between f/4 and f/11. I ended up with a final aperture of f/4.2 which worked pretty well, and allowed me to get the drops on the left tack-sharp while the drops on the right were just barely out of focus despite only being a fraction of an inch out of the focal plane. And then the blades in the background basically disappearing entirely, which I thought was really cool.

What makes this image particularly interesting, at least in my opinion, are the colors. The palette is really just three colors: yellow, green, and brown and all of them have a rich, earthy tone that I really like. Combine that with the precipitation, and the whole image just feels alive even though it is clearly quite static. This is the third time in recent memory that I have attempted this macro-straight-down technique, and I must say I’m really happy with what I have seen so far. I hope I can keep exploring this and, as I often say here on Weekly Fifty, finding new ways of looking at the world around me.