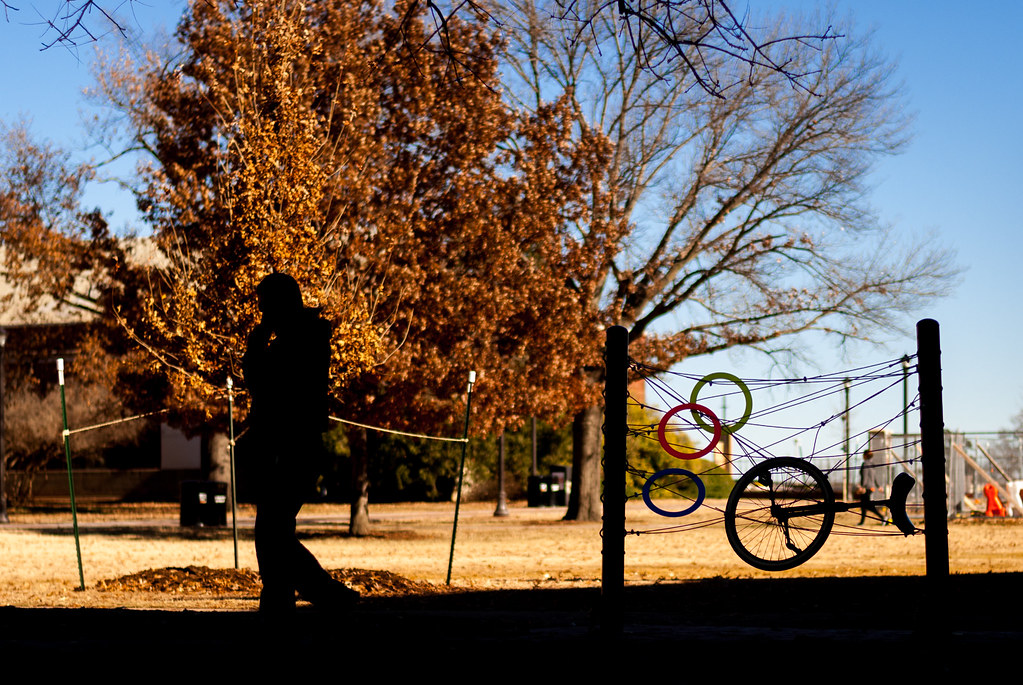 If you’re not quite sure what’s happening in this picture, don’t worry since I don’t really have much of an idea either. On the right-hand side is a unicycle that is strung up between two posts with some steel cable, and intertwined in the same mesh is a couple of plastic frisbees. I think it’s some kind of artwork, though its purpose has never really been clear to me. (And as a guy who often rides a unicycle around campus I want to ask the creator if I could maybe help him or her with a few lessons!) I have often thought it might make for an interesting silhouette picture but there is usually so much activity with students, professors, tours, gardening crews, and other things going on that it’s hard to get in a good shot. However, one day late in the Fall 2015 semester I was on an errand and noticed that the light and general lack of people made for the kind of picture I had thought about for a while. Good thing I had my camera with me :)

Originally I was just looking to get the unicycle itself but as a pedestrian walked by I thought I would use it as an opportunity to get a bit more energy in the shot. This was taken with my D200 which is notoriously unreliable when using apertures smaller than f/1.8 on my 50mm lens, but in this case that was actually a good thing since the wide-open lens opening allowed for a bit of background blur that would not really happen at smaller apertures. I took two pictures and had a bit of a tough time deciding which one of them was my favorite but in this one it’s much more clear that there is a person walking by whereas in the other one it’s not as immediately noticeable. And since I exposed for the background and not the foreground it resulted in a nice clean silhouette, though if you look closely you can actually make out the red, yellow, and blue colors of the discs next to the unicycle.

This might be seen by some as a companion piece to this picture from a few weeks ago, but any similarities are entirely unintentional other than the idea of capturing a silhouette. I must admit that I have been somewhat fascinated with these types of shots lately and would like to explore it a bit more, possibly creating intentional silhouettes with a few willing (and patient) individuals. It’s fun to try these types of pictures and see what turns up. I should also mention that I did edit this quite a bit in Lightroom to get the colors in the background how I wanted them, and I do wish there was less clutter (chain link fence on the right, tree supports on the left, etc.) in the shot but as the saying goes, it is what it is and I’m happy for what I was able to capture. As Spike says, “Whatever happens, happens” and that’s a lesson I’ve had to learn over and over again with every time I raise my camera to my eye :)