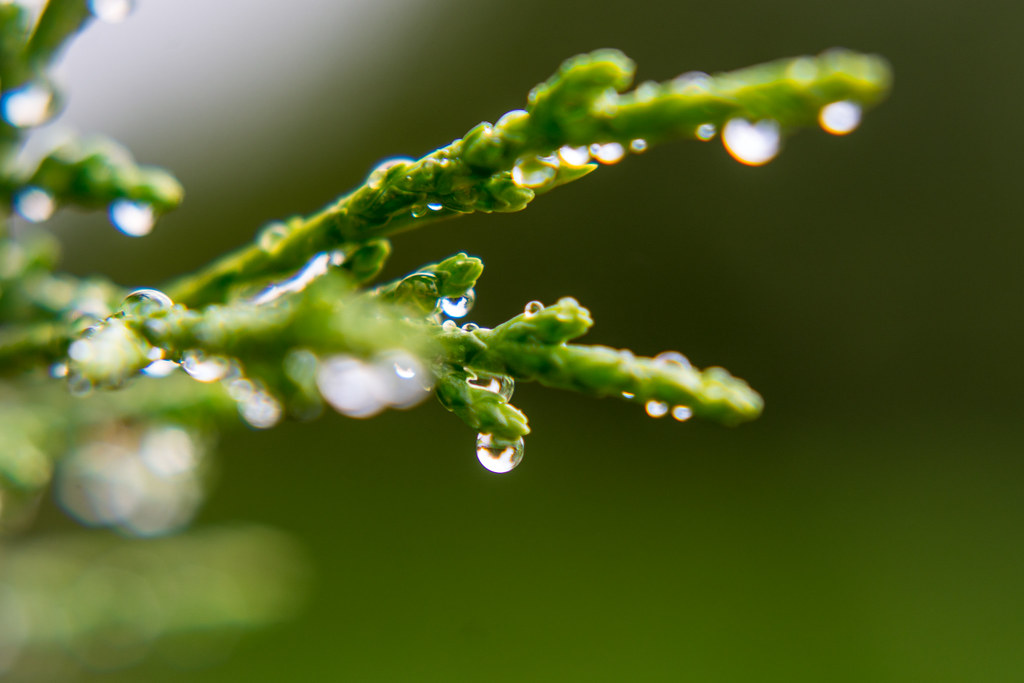 Longtime readers of Weekly Fifty might see echoes of an earlier picture in this one, but there’s a bit of a twist: the first one was taken with my regular 50mm lens, while this one was shot with my 10x close-up filter. I hope it’s not too derivative to just take the same type of picture I have taken before, but you know…it doesn’t really matter, I suppose. I have found, since getting these close-up filters, that I quite enjoy taking images of nature accented by droplets of water, and it’s fun to do this sort of thing even if it is treading trodden ground. (Photographically speaking, of course.) When I shot this image I wasn’t even thinking of the picture I took over two years ago, but as I edited this I couldn’t help but reminded of its predecessor and I do wonder if, on some level, my composition here was informed by the image from the summer of 2014. And even if it was, well, that’s kind of the point of doing something repeatedly isn’t it? If you want to get better at a skill you have to practice it over and over, and since I would like to get better at taking pictures of leaves and flowers with water drops on them, I should probably keep doing exactly that :)

Shooting this with a close-up filter did present its own unique set of challenges, and also dramatically altered some key elements of the image when you compare it to the first one. For one, the subject appears dramatically larger simply because I was able to get so much closer to it. The depth of field is markedly shallower as a result, and the image takes on a more intimate feel whereas the first one seems like the droplet is part of a much larger scene. The leaves of this bush that you see here are much smaller than the leaves of the tree in the original image, and while none of these characteristics makes the picture inherently better it is interesting to see how the close-up filter has such a dramatic effect on things. In fact, when I compare the two side-by-side I almost prefer the original because it feels like a more complete composition and also has the benefit of showing a few streaks of rain, whereas in today’s picture the focus is clearly the droplet and almost everything else is secondary. There isn’t much in the way of a rest of the scene, as it were. It’s not good or bad, it’s just different.

I think this speaks to one issue with which I continually struggle when it comes to photography: the desire to always try something new and different. I mentioned several weeks ago in pictures of a squirrel and a duck that I felt like these types of images were almost cheap because they are not all that difficult, given that I work about a block away from the pond on campus where these animals congregate daily. In a similar fashion today’s picture requires nothing special at all other than a bit of rain, and even that could be faked with a spray bottle and some tap water. And so after taking a picture of a rainy leaf, a duck, or a squirrel I often think of it as an item on a checklist that has been completed, never to be revisited. However, this type of thinking is entirely incorrect! If you like taking pictures of something, keep doing it! No one says you can’t, and just because you got a shot of a beautiful sunrise, your kids playing in the sprinkler, a bolt of lightning, or anything else you were aiming for, doesn’t mean you should stop there. Do it again, and again, and again and see what you can learn from the experience. Far from being the stopping point, these pictures should be the starting point of a photographic journey.

And so with that I’ll just close by saying this probably won’t be the last time you see a picture here on Weekly Fifty of a leaf with some water dripping off it :)