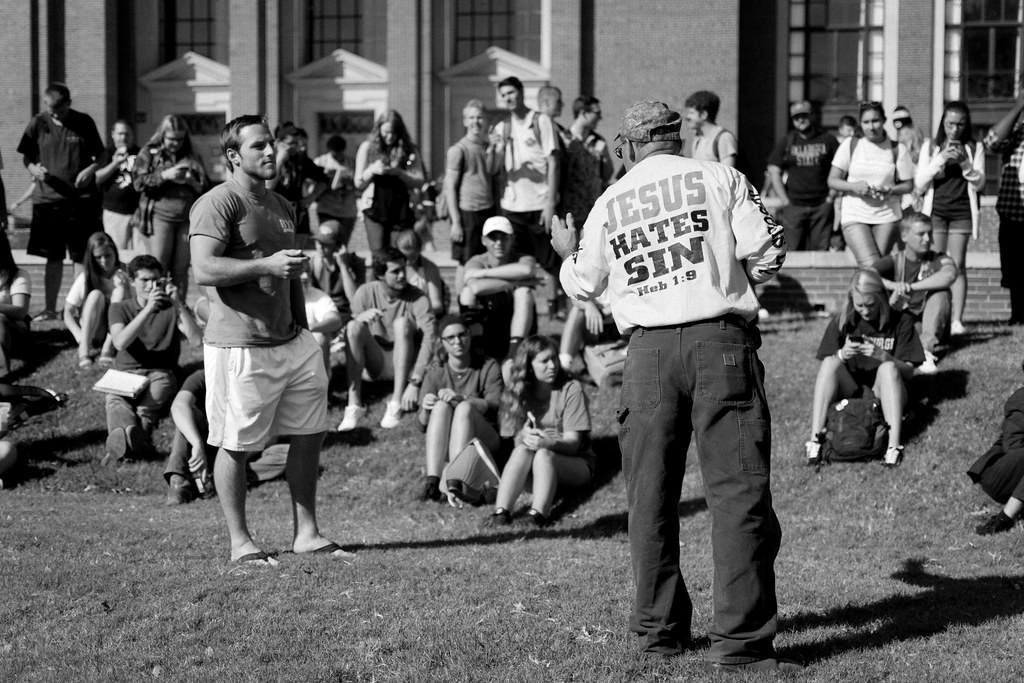 This picture has been a long time in coming, and though I didn’t exactly enjoy the process of taking it I am glad to have had the experience. It serves as a companion piece, or rather a counterpoint, to a picture I posted in May of this year where a man was doing his best to spread the gospel and save souls but using a much different and, I would argue, more effective technique.

Every now and again this man, whom the students have nicknamed Preacher Bob, shows up on campus with a cohort of bible-thumpers and sign-wavers to rile up the student body from the lawn in front of Low Library. You can usually tell when they are around because of the large crowd gathers (and as Dave Piner said, nothing attracts a crowd like a crowd) and things can, and often do, get quite hostile. The pattern is similar every time: Bob waves his bible, yells at the students, and generally condemns the student body to the pits of hades for their sinful ways. Usually someone will confront him, as you can see here, and attempt to debate or discuss theological points while quoting scripture, but Bob remains resolute and will hear none of it. Some students yell and jeer, others start chants to overpower the sound of his voice, and at the end of the day I very much doubt that any progress is made by anyone involved.

All this activity makes for a very uncomfortable situation, but that’s exactly why I was glad to have had the experience of taking this photograph. I stood at a distance observing the scene for a few minutes and then realized that this would be a good picture-taking opportunity if only I could work up the gumption to walk out there and start snapping photos. So I did just that. I put my D7100 in 3D tracking mode because my usual focus-and-recompose method wouldn’t work with how much Bob was walking around, and walked over to the knoll from which he was casting aspersions on the students surrounding him.

There are rules when Preacher Bob or his counterparts come to campus, the most important one being that you are not allowed to get physically close to any of them. I believe this has to do with prior incidents involving physical violence, but in any case I knew that I wanted to separate Bob from the rest of the people visually so I shot wide open at f/1.8 in order to get a shallow depth of field–or as shallow as I could, given the circumstances. I initially tried standing in front of him to get his face in the shot, but wasn’t happy with the composition so I moved behind him and tried to capture his emotion through body language. I specifically waited until he was waving his hand in an accusatory manner at the student he was talking to. (Whose shirt, incidentally, reads “Brothers Under Christ, 2016 Dad’s Day, Oklahoma State University. I honestly think this student was just seeking clarification and not out to egg on the Preacher.) I did this so I could give the viewer a sense of Bob’s body language as well as the student’s emotional response since you can see his face and half-outstretched hand. Since I couldn’t show the face of Bob and the face of this student at the same time I erred on the side of the student and tried to let Bob’s body language and boldface t-shirt convey a message to the viewer instead about the type of interpersonal interaction that was taking place here.

I was only here for a few minutes but I left feeling slightly uncomfortable, and also glad to have had a few years of practice using my camera so I wasn’t trying to figure out buttons or controls in the middle of what could have been a very volatile situation. I do believe that deep down Bob does believe in what he is doing, and a part of me admires and respects him for having the courage to face off against hundreds of angry and flustered students…but only a very small part. These students are angry because Bob and his kind intentionally stir controversy and discontent, instead of sowing seeds of the Gospel that will take root in fertile soil. I have seen Bob and many others like him over the years and rarely are they interested in having sincere, honest dialog with students in order to help them wade through what is often a spiritually challenging time in their lives. I’d much rather they took the route of the Gideons and I am fairly certain they would be far more effective as a result.