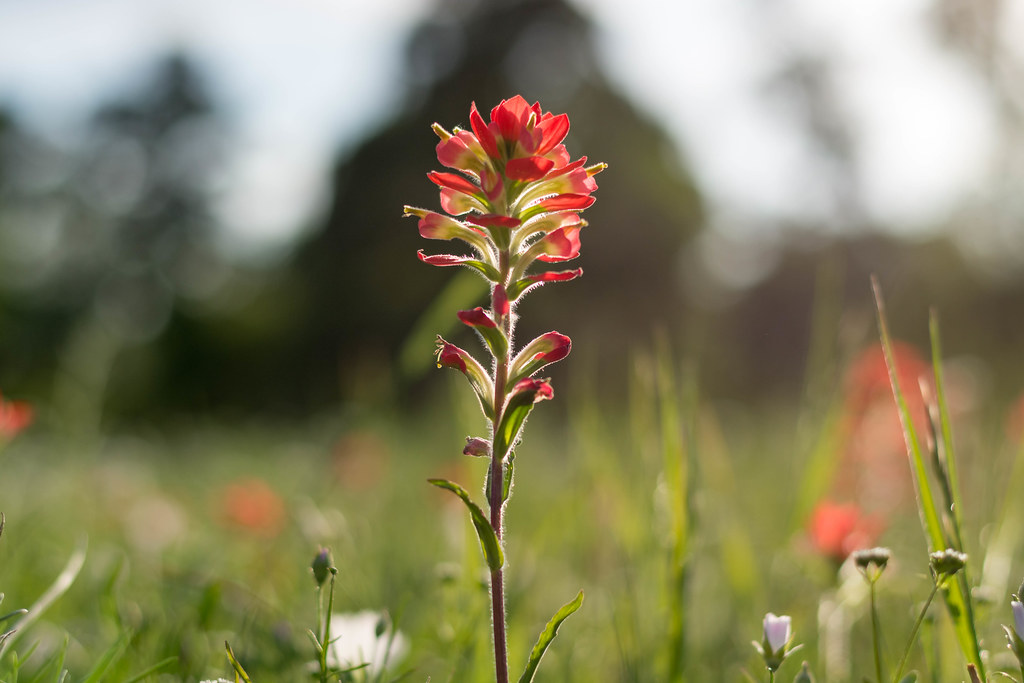 This is another classic example of the type of photo I find myself taking so often: it’s a rather normal subject, in a rather unremarkable situation, that I see on a fairly regular basis, and yet I thought it would make for an interesting photograph. And I think it worked out pretty well. If you scroll back far enough here on the blog you will see a handful of similar photos–that is to say, Indian Paintbrush flowers in the morning light, including one of my favorite photos I’ve ever taken. These flowers practically litter the countryside here in Oklahoma, but it wasn’t until the night I shot this image that I even found out their name–a bit of trivia that came about during a conversation I had with my neighbor after I put my camera away and got on my bike to ride back home after taking this shot.

I’m getting a little ahead of myself here. The point is, there isn’t anything inherently unique about this flower or this setting, and yet it made for a pretty cool shot.

So about the image: Each spring my neighbor lets a rather large patch of his two-acre lawn go unmowed which means we get a little sliver of honest-to-goodness wildflowers and other flora just across the street. It doesn’t take long for this spot to fill with flowers of all types including the one you see here, and as we were walking past his house after dinner I thought it would be fun to go back the next day and take a couple of shots. (We’re good friends with these neighbors, and I did clear it with him to make sure he didn’t mind me poking around on his grass with my camera.) The next evening as the kids were getting ready for bed I hopped on my bike, pedaled a few hundred yards, and started snapping some shots. I even found myself literally on the ground in a prone position trying to line up everything just so.

I probably took about 50 shots of flowers, both Indian Paintbrush and otherwise, and this one rose to the top as my personal pick of the litter. I followed the same principle as the dandelion image from earlier this year in that I realized I could make the flower stand out a bit more if I put it against a darker background. While the dandelion had a much greater degree of contrast with the tree behind it, this flower enjoys the advantage of having some really cool rim lighting around the petals which was really fun in its own right. I used the trust old D7100 and 50mm lens and shot this at f/2.4 so as to get the flower tack sharp without getting too carried away with depth of field. I tell you what man, that camera and lens combination isn’t fancy but it sure does get the job done. Not even in a pinch either–just for general photography.

It did feel a little weird crawling, literally, in my neighbor’s field for 15 minutes but I’ve really tried to abandon any sense of self-consciousness I used to have about that sort of thing. I had permission to be there, I wasn’t causing any harm to anyone, and as I was leaving I ended up having a really pleasant conversation with a neighbor across the street whom I did not know but now wave at every time we go past his house. No big moral or grand lesson here, other than to say that it’s fun to take photos, even of familiar subjects in familiar settings, and see what happens as a result :)