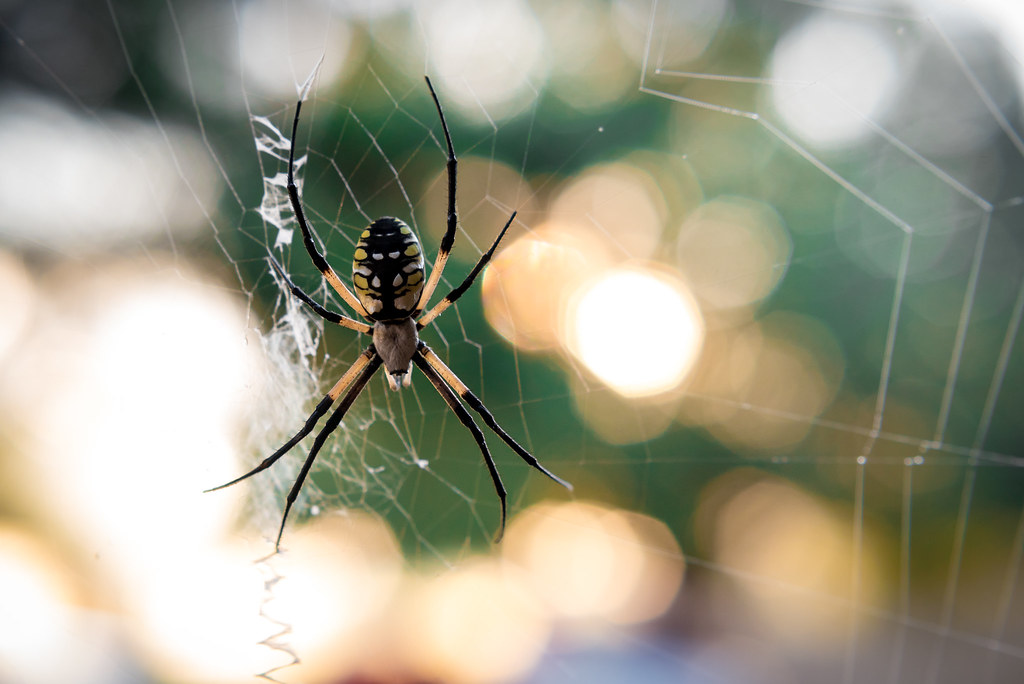 Keen readers of this blog might have noticed that each year around this time I post a picture or two of a spider, and if you have been wondering when the 2016 edition of such a photo might show up…well, here you go :) The ones I just linked to were all taken right in my own back yard, and this week’s picture was shot only a few feet away from where I made the backlit image of a spider at night. I guess it just goes to show you how rich and vibrant nature can be even without leaving your own property. Though in this case I must give credit to my wife who actually spotted this year’s spider, and had she not said something I might have knocked its web into oblivion by accident while we were clearing away some shrubs in the yard.

As you might have guessed, one thing that makes this particular spider different from any of the others I have posted is that this time I had my set of close-up filters to play with. I knew a +10 filter would be way too much, and the spider’s body would fill the frame and leave no room for the legs or anything else. A +1 or +2 would probably not do a whole lot, so I set out with my D750, 50mm lens, and +4 filter. The results were fantastic, if you don’t mind me saying so. This is the type of picture I wish I could have gotten for the past three years, and to finally be able to take it was a huge personal victory for me. Looking back on the other images I can clearly see a progression in terms of composition, framing, and lighting and I think one could draw a pretty direct line from those earlier images to this one in terms of an overall learning curve. Not that it’s the end result, mind you, but just another step on what I guess you could call my own photographic journey. Certainly I have a ton left to learn (especially since I don’t even have a true macro lens for shots like this) but this image was nice validation that I am learning more along the way, bit by bit.

This picture was taken on a Sunday morning as we were all getting ready to go to church but we had just a few minutes to spare before loading the kids up in the car. The boys and I went outside to check on the spider, which we had seen and photographed the night before after we fed it a cricket:

Overnight the spider had evidently finished off the cricket and, as this kind of arachnid usually does, kicked the carcass out of the web and subsequently rebuilt any damaged threads. When we went to view it in the morning it was hanging out, literally, on its newly-refreshed web enjoying the sunrise and waiting for an unsuspecting moth or other insect to wander into its silky trap. With the sun peeking over the horizon there was a window of just a few minutes where I knew the spider would be nicely backlit so I took a few dozen shots, some at f/4 and some about two stops smaller, and was quite pleased with the majority of them. In fact the only real problem I had with the photo was choosing which one I liked, and enlisted the help of my wife with her keen eye for color and detail who also helped me decide to crop the picture so the spider is just a bit on the left side.

I tried hard to compose the picture in such a way that the glowing sunlight poking through the trees would serve to frame the spider itself, and I think the end result works out quite well. A few minutes later the sun had risen past the treetops and this particular photographic moment had vanished, but I was glad I could catch it for posterity. In the days after this picture was taken my boys and I continued to keep our garden spider well-fed thanks to a steady diet of crickets and grasshoppers we found in the yard and while it did hang around for a while it eventually went wherever spiders go in the winter. Who knows…maybe it will show up next year for another round of spider pics :)