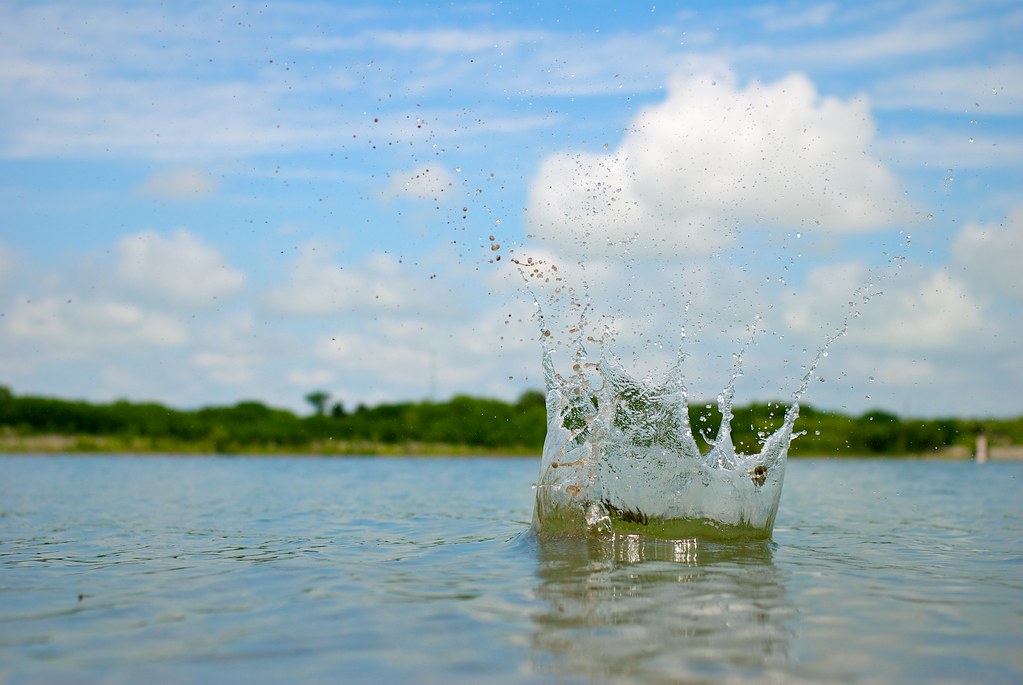 This photo, unlike some of the others here on Weekly Fifty that were captured in a moment of spontaneity, required a fair bit of planning. My family was visiting Milford Lake in Kansas, the subject of a blog photo from 2013, and while the kids were playing on the beach my brother Tom and I did some experimenting with rocks, water, and photography. I wanted to capture the result of a rock hitting the water, and it took several iterations of the same basic idea in order for this picture to come to fruition. Over the course of many attempts I learned to adjust the angle at which I shot, the overall framing, the method for predicting where Tom would throw a rock, and more details which you can find in the attached audio commentary. After each attempt, my brother would wait patiently while I checked the results on my dim camera LCD screen (I shot with my D200, as usual, because I didn’t want to bring my D7100 that close to the water) and then set things up for another try. Incidentally, this is not the best photo from the exercise: that distinction goes to a picture with a mushroom-shaped plume exploding from the water, but unfortunately it was not quite in focus. As such, I’m content to settle with this one but I’m fairly happy with the result. And supremely grateful to Tom for all his help :) 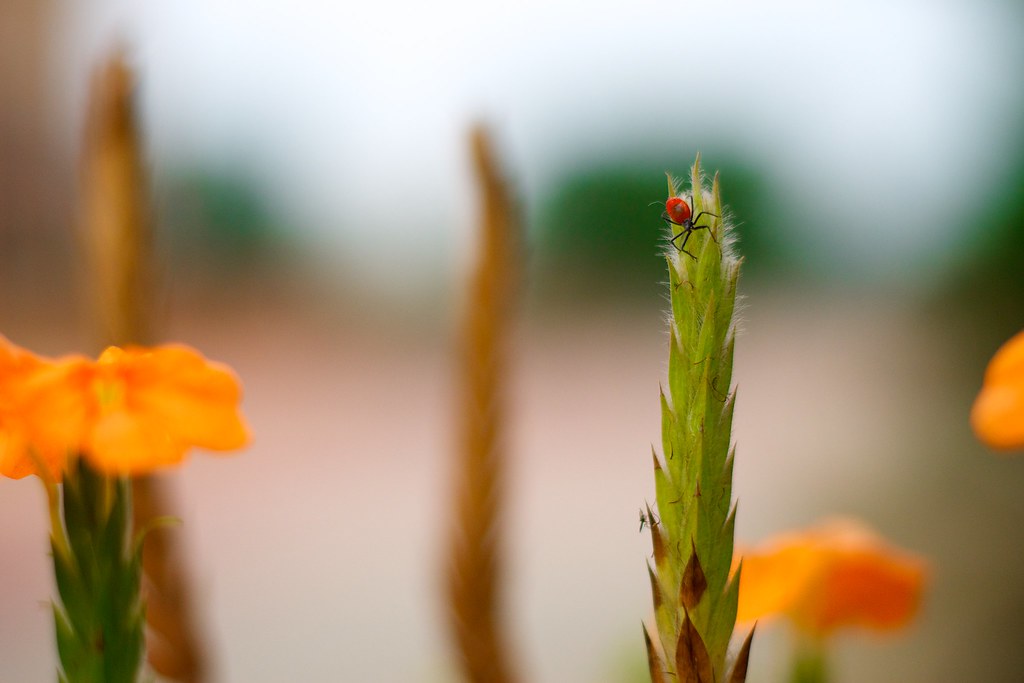 We’ve all heard the saying Stop and smell the roses, and on the day I took this photo that is exactly what I did. I was out for a short walk with my D200 and saw a collection of flowers in a giant pot, so I stooped down low just to examine them. There was nothing special or noteworthy about these flowers, but I have found that sometimes it’s nice to take a break and look at the world a bit closer and see what you can find. I soon noticed that there was at least a dozen small insects crawling around on the green stems and orange petals, almost like an entire micro-ecosystem was unfolding before my very eyes. The spider in this photo was too close for autofocus so I had to switch to manual, and I also tried to position it such that the background elements served to complement my unwitting subject rather than draw the viewer’s attention away. Perhaps f/1.8 was a bit too wide for this picture, as the depth of field is almost distracting, but I think overall it works OK. 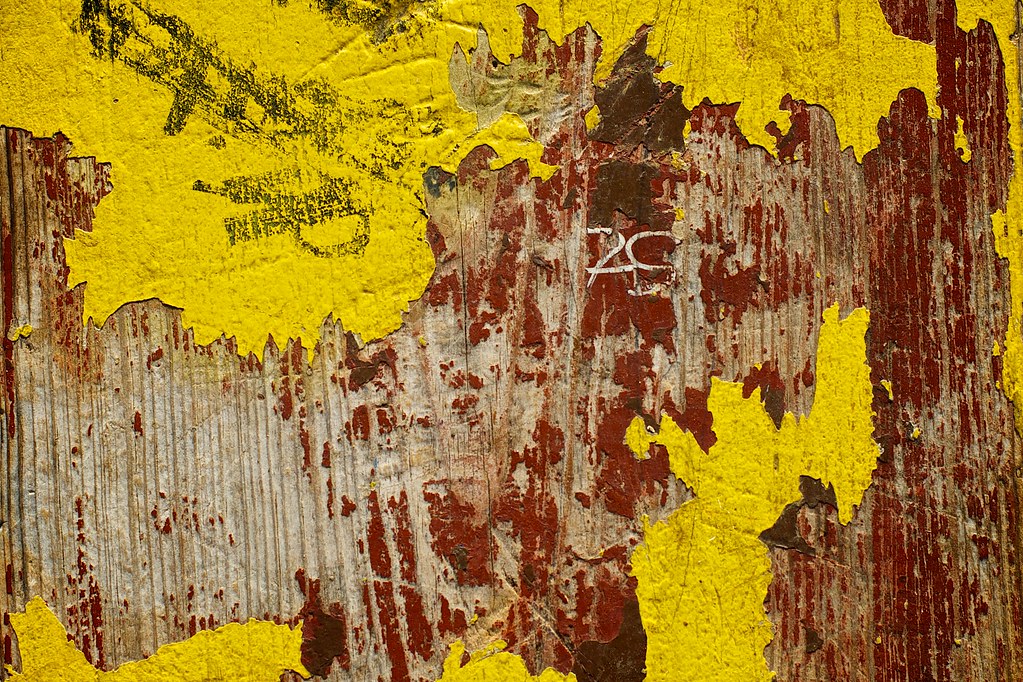 Like other photos on this blog, I have seen this object many times but never really stopped to consider the photographic opportunities it afforded. It’s an ordinary picnic table in the middle of a park located next to a junior high, and while it seems rather pedestrian and mundane at first, there are actually many layers of history and meaning hidden beneath the paint and scratches of the table. I don’t know if this picture is even all that interesting, but in terms of telling a story, there are many chapters etched on these wooden boards. While most have been long since lost to the ravages of time, it’s interesting to ponder everything that has transpired over the years around the benches of this humble picnic table. 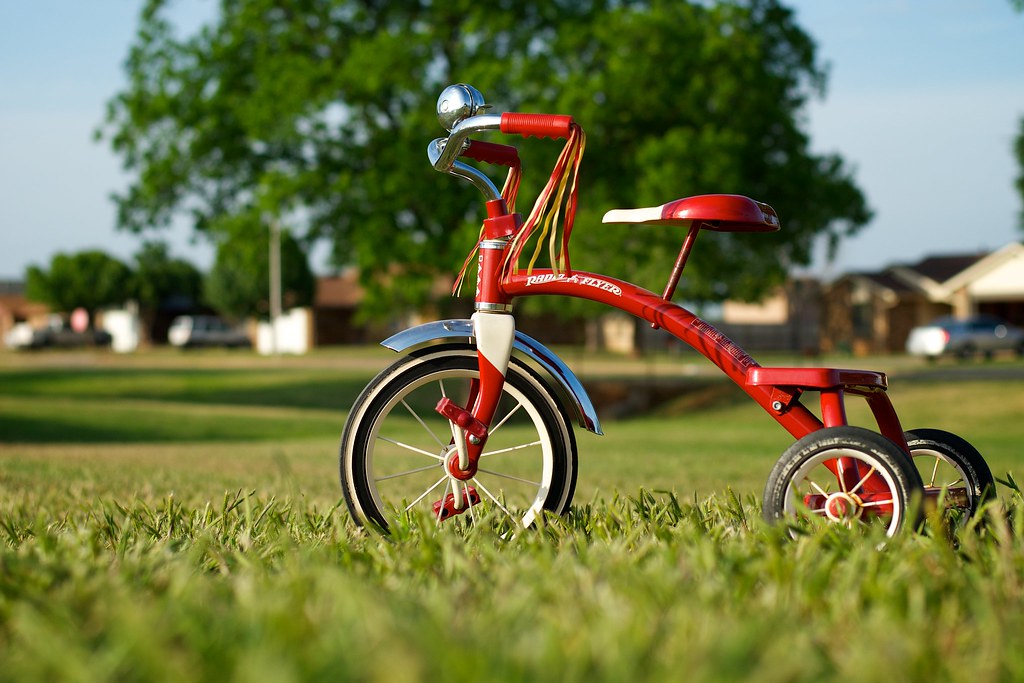 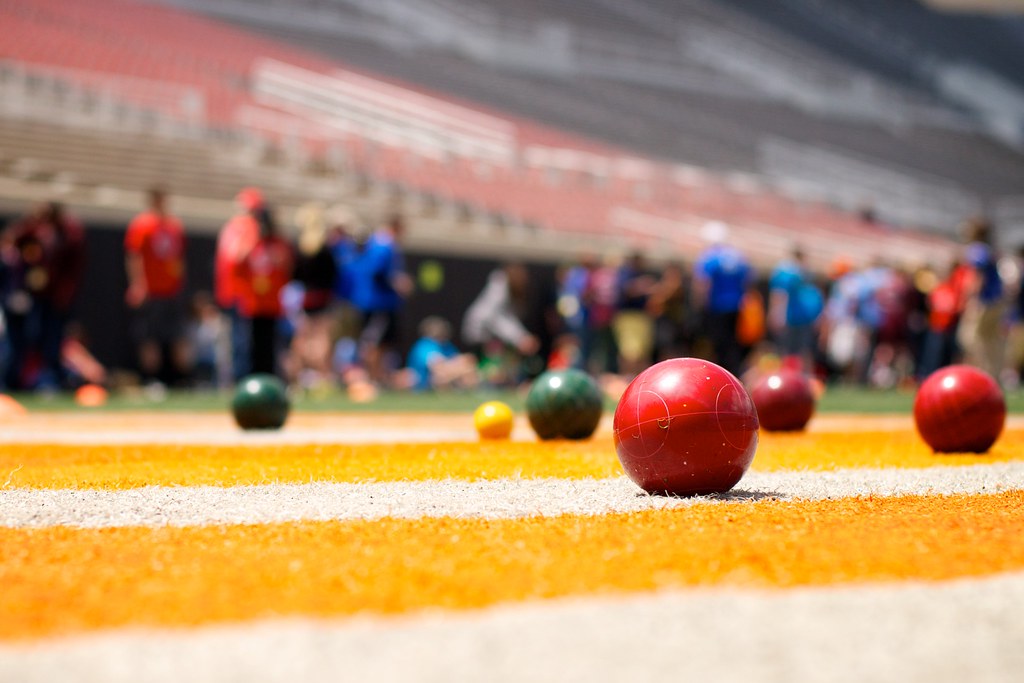 I took this at the Bocce Ball tournament during the annual Oklahoma Special Olympics, held on the OSU campus at Boone Pickens Stadium. My coworker’s daughter was helping out with this particular event so we walked over to see her and the team she was with, and while we were there I tried to capture a bit of the scene with my camera. In doing so I realized again just how far I have to go when it comes to taking pictures of people, especially in a crowded public setting. I just did not feel comfortable getting close enough to these athletes to take their photos (I’m just a dude with a camera, after all, and not a credentialed sports photographer or anything like that) so I tried this approach instead. I’m happy with the picture itself, but I’m not sure if it works to adequately capture the energy and excitement of the day. No, scratch that. I know it does not work. Hmm. I’m going to need to practice sports photography more… 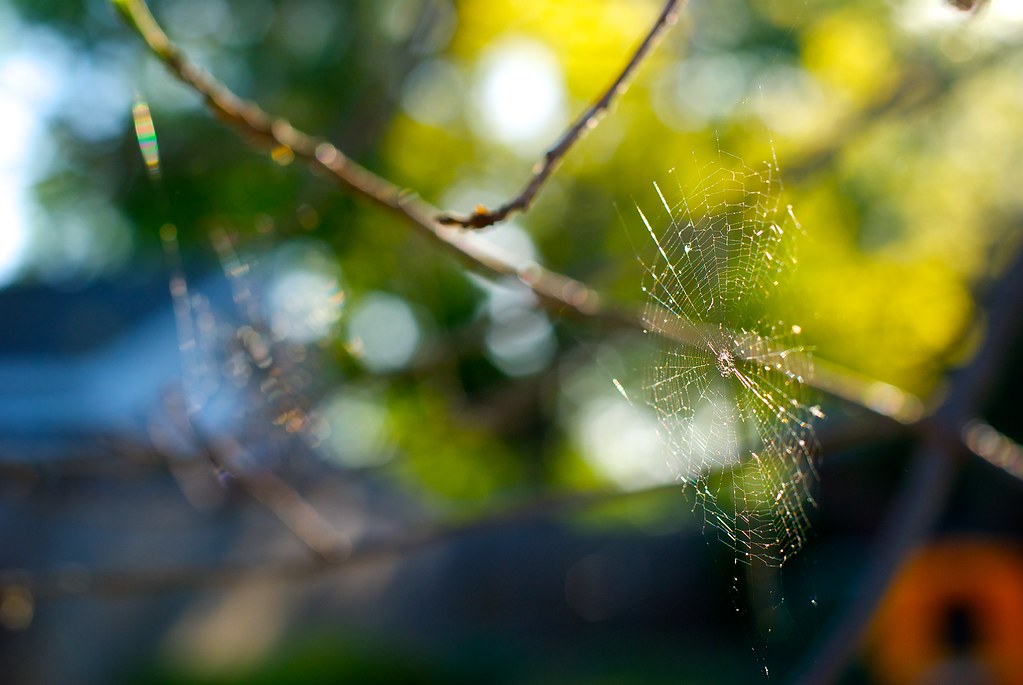 I don’t often use manual focus when shooting, and I suppose it’s a skill that I would like to try more as time goes on, but it’s so darn easy to use autofocus that I wonder if I will ever actually make myself go full manual. Still, it’s times like this when focusing by hand can really come in handy. I was playing with my kids outside when I saw a few tiny spider webs in the low-hanging branches of our backyard Chinese Pistache tree, and thought it would make for an interesting photo especially with the impending sunset. Trouble was, I couldn’t get my lens to focus on the web closest to me so I had to do my best to compose the shot manually, and while it mostly worked out you can see that the foreground of the web isn’t quite as crisp as I would like it. Even at f/4 the depth of field is simply too shallow, or else I needed to be a bit more careful when shooting. I don’t think it’s a bad photo, but I do think I missed out on what could have been a much better picture had I taken a few more shots or at least taken the time to check things in camera. But then every minute I spent fiddling with my D200 was a minute not playing with my kids, and if that means I don’t get the exact picture I’m looking for, it’s a tradeoff I sure can live with :) 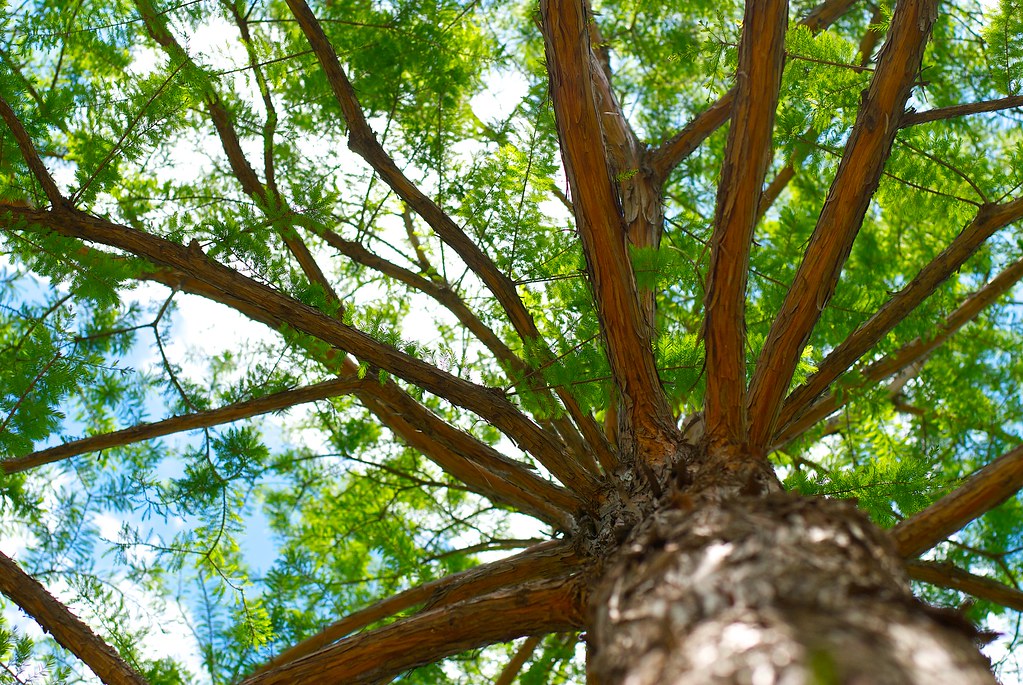 This photo was quite unexpected, but I am rather pleased with how it turned out and would like to try this sort of thing again. I went on a brief photo walk with one of my coworkers the other day, and saw her looking up at the trees and taking snapshots with her iPhone. For some reason this concept had not really occurred to me before, and I thought I would try replicating what she was doing. She talked about how cool it was to see the leaves light up with the sun behind them, and she sure was right. It was a little tricky trying to nail the exposure, and it helped that I set the shutter button to lock exposure while using the back button for focusing. The other issue was aperture, as I had no idea what kind of depth of field I was even looking for. Since the screen on my D200 is so tiny it’s hard to visualize this when out shooting, so I tried a couple different values and but knew that anything beyond f/4 would probably not have much DOF to speak of. Thankfully this picture at f/3.3 worked out quite nicely. I had to tweak it a bit in post, but overall I am quite happy with the dynamic range I was able to capture without doing any sort of HDR trickery. 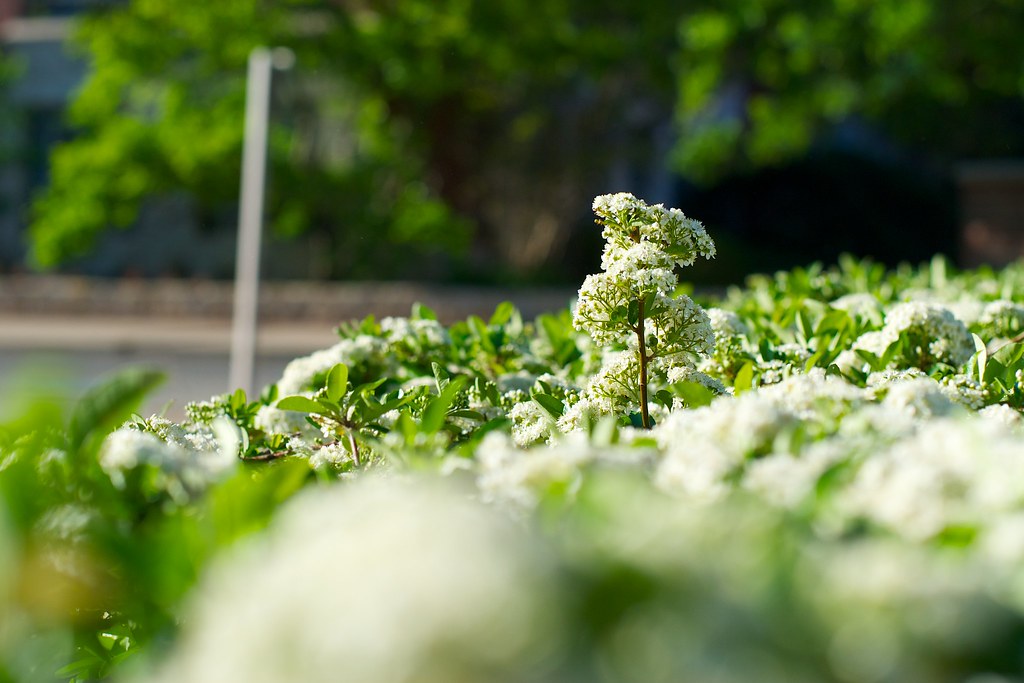 This was another example of why you should always have your camera with you. It was about 8am and I had to take something across campus, and even though I did not have a free hand I figured I might as well take my D200 with me just in case. So I strapped it to my back, trekked across campus, dropped off the package, and turned to walk back when I spotted this flower-covered branch poking up from amidst a sea of white clouds. It almost appeared to have some sort of inner light, a glow if you will, since the sun was low on the horizon and had not reached its full intensity for the day. I tried a few different aperture values, and ended up with the ol’ trusty f/4. It has lately become my go-to aperture for most outdoor shooting, though having the option of blowing things wide open at f/1.8 sure is handy when you need it. 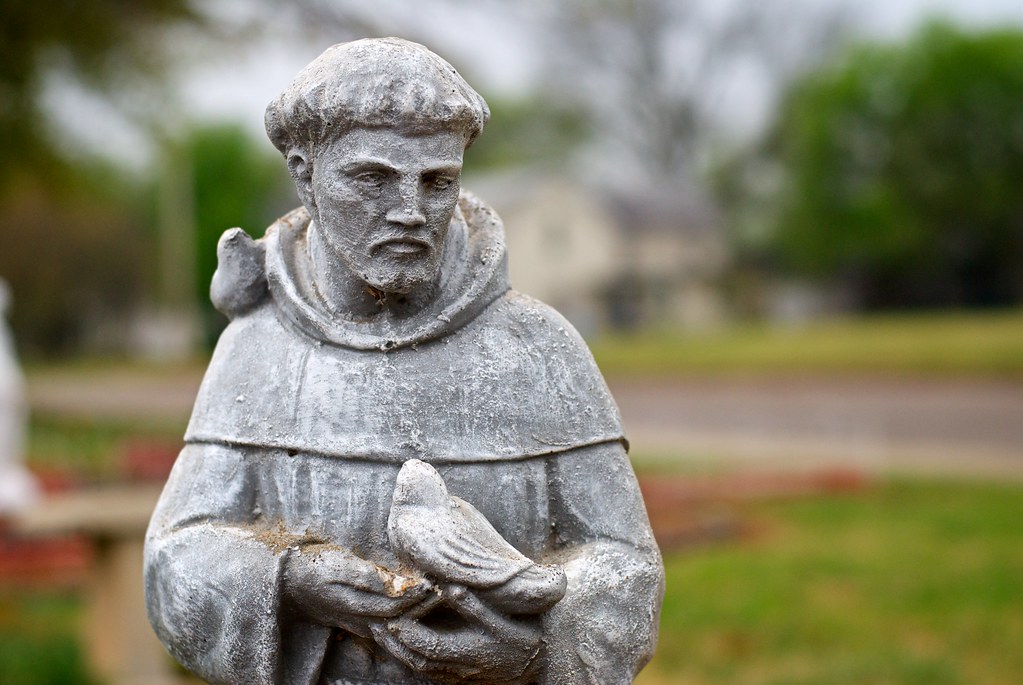 I have seen this statue of Saint Francis many times, since it’s right near my son’s daycare, but I never quite knew what to make of it from a photographic perspective (har!). The day I took this picture it finally hit me: lighting! (duh) It was cloudy and a bit rainy when I dropped my son off on this particular day, and because I had my camera with me I went over to the garden where this statue is placed and fired off a couple shots. I’m very happy with how it turned out, and I hope I can run out and take some more pics the next time it’s cloudy and overcast. We don’t get too many days like that in Oklahoma, so when they happen you gotta use ’em!

Side note: I apologize for the chime noise that pops up near the end of the audio commentary. That was my phone with a new text message, which I forgot to silence. Oops. 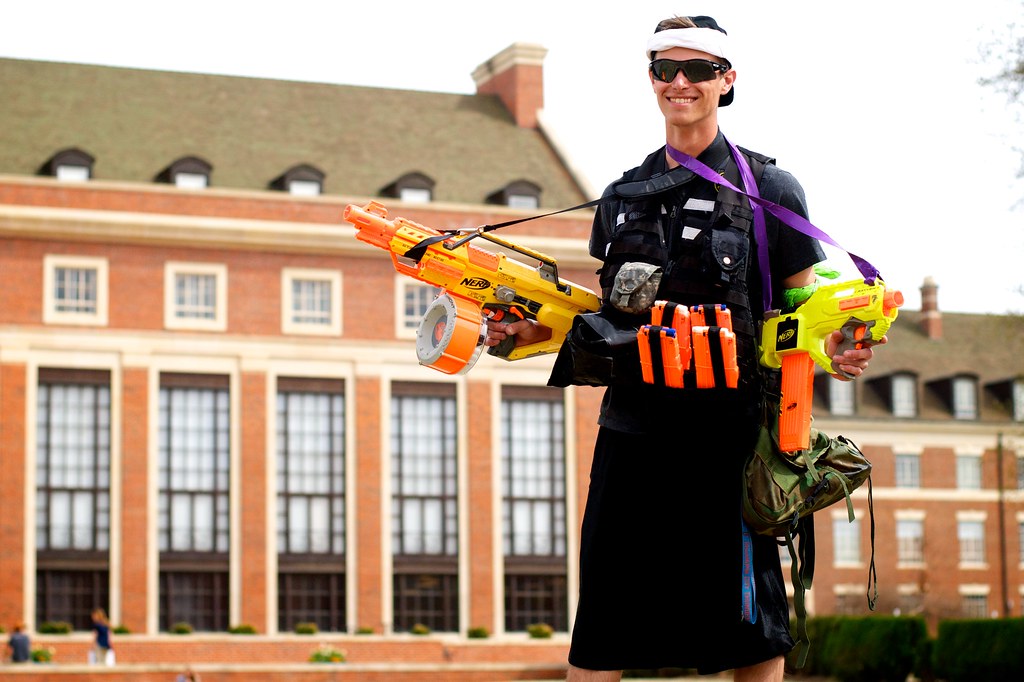 This photo is a classic example of the old adage the best camera is the one you have with you. And a good example of why it’s not a bad idea to take a nicer camera if you’ve got one. When my coworkers and I went across campus to run an errand, I left my D200 in my office because I figured it would be kind of a hassle to carry. And besides, what photo could I possibly take on a brief jaunt to the Student Union? But I went back and grabbed it before we left the building, and it’s a good thing too. I saw this dude outfitted with enough NERF weaponry to wreak havok on an office full of cubicles, but he was actually a participant in the annual campus-wide game called Humans vs. Zombies. Let’s just say if I were a zombie, I don’t think either my camera or I would have survived the encounter :)